◼︎ SPANDAU BASSIST MARTIN KEMP REMINDS US via Twitter that on this day in 1984, he and about 40 other mainly British superstars went into the studio under the group name of Band Aid to record the fund-raising single, Do They Know It’s Christmas? This collabarative gesture in the name of charity held the record for 13 years as the UK’s biggest selling chart single of all time. It raised millions for the Ethiopian famine and led directly to Live Aid, the globally televised rock concerts in 1985. Kemp said today: “It still gives me a tingle when I hear it” and then proudly posted a picture of the three platinum discs he and every other participant received a year later after it had clocked more than 3 million sales in the UK.

➢ Band Aid ’84, when pop made its noblest gesture but the 80s ceased to swing
➢ Ure and Kemp on the shenanigans that led up to Band Aid 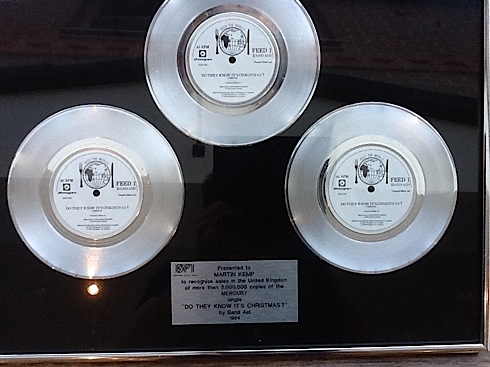 Martin Kemp’s three platinum discs presented by the BPI for sales of Do They Know It’s Christmas?