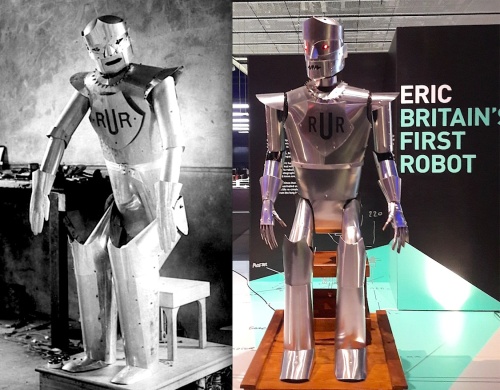 Eric the robot, then and now: Emerging from the workshop in 1928, left, and today on gleaming display in London’s Science Museum. His former tight-lipped expression has been enlivened with spiky teeth by his builder Giles Walker

◼ MEET ERIC, BRITAIN’S FIRST ROBOT, built in 1928 and reincarnated as this full-size working replica by London’s Science Museum in a preview of next year’s blockbuster exhibition on 500 years of robotics. Within a decade of the word robot being coined in Karel Čapek’s 1920 play R.U.R. (Rossum’s Universal Robots), the 6ft-tall Eric toured the world as superstar but four years later he suddenly vanished. More than 800 backers of the museum’s Kickstarter campaign funded an Eric lookalike to be recreated by artist and robot builder Giles Walker. The new Eric has now joined the permanent collection and you can see him on static display until 30 November, though he’s giving three animated demos daily as a sparky mechanical person. Free. 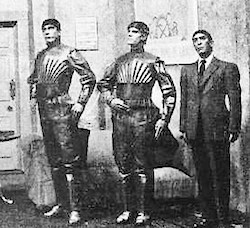 Originally built by Captain W.H. Richards & A.H. Reffell to stand in for the Duke of York and open a model engineers exhibition, Eric was everything we now imagine a robot to be: humanoid, metallic and able to talk, though he moved only in limited ways, standing and sitting and moving his limbs. Giles Walker’s reincarnation maintains Eric’s primitive charm but has added some sleek touches, such as flexible elbows. The original had 35,000 volts sparking through his lips as he spoke. Today Giles has given Eric LEDs flashing across some spiky teeth instead, which is “a lot safer”.

Of the insides, he adds: “I’ve converted what was originally a load of pulleys and electromagnets into a digital system.” This makes Eric a very modern old robot, despite the verdict of TV star John Barrowman when Eric appeared on BBC TV’s One Show last week. He thought Eric looked like “an older-type cyberman”. Actually, John, the truth is probably the exact opposite: that Doctor Who’s cybermen were inspired by the Eric of the 1920s.