➤ Sullivan the wag changes hats at the touch of his paintbrush

Carioca then and now: left, the cover for Chris Sullivan’s band’s 1982 single Carioca and, right, his new upfront reworking for 2019

◼ WHO IS CHRIS SULLIVAN THIS WEEK? That all-round creative dynamo who drove much of the Swinging Eighties and ran the influential Wag club for 19 years epitomised that New Romantic era by declaring “One look lasts a day”. Suddenly he is enjoying another creative spurt. Fans will have noticed a series of bold and comic painted caricatures of his friends appearing on Facebook this month. As affectionate portraits they speak for themselves. But then last week he posted one called Carioca, inspired directly by the 12-inch single sleeve for his band Blue Rondo a la Turk. It was included in their album Chewing The Fat which dates from 1982.

Fans will also recall that Sullivan as vocalist not only put the band together as a septet of crazy soul-jazz-Latin musicians on a 0-to-10 sliding scale of eccentricity – where all of them scored at least an 11 – that won them a £500k contract with Virgin. He also painted every one of their vinyl record sleeves in his own playful version of cubism. So here above we can now compare his restrained vamp Carioca from 1982 with her current rather more in-your-face madame for 2019. So what’s this all about, Chris?

Bear in mind Sullivan was one of that gang of St Martin’s heroes who put London clubs such as the Blitz, Beat Route and the Wag on the map from 1980 on, and had studied first on the college’s fashion course, then switched to fine art. I am off to Soho to find out and will be reporting back. . . 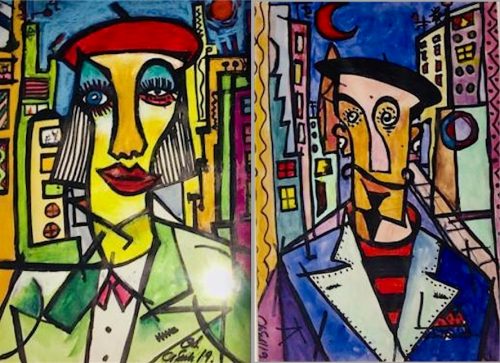 Sullivan caricatures: A pair of what the painter calls Beat Peeps from Eighties New York

STEPPING OUT TO CARIOCA ON
THE ITV SHOW RAZZMATAZZ 1982

➢ Elsewhere at Shapers of the 80s:
Yours truly writes the first magazine feature about Blue Rondo a la Turk as they created a new buzz with Latin sounds and an extreme suited dude look – from New Sounds New Styles in August 1981