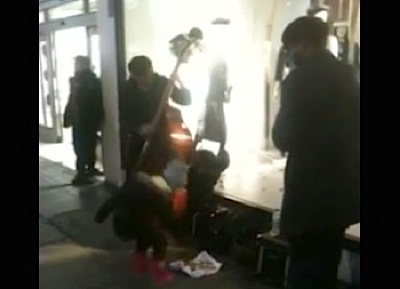 ➢ CLICK THE PIC TO VIEW VIDEO of blues troubadour Errol Linton and his double-bassist Jean-Pierre Lampé busking in London’s Oxford Street last night… “How good are they?!” says Spandau Ballet sax player Steve Norman who posted this cellphone video on his Twitter page. He told Shapersofthe80s: “I didn’t know who they were when I caught them on my phone. I was knocked out, so I approached the singer Errol and got his name and number. Always good to connect with talent such as him.” 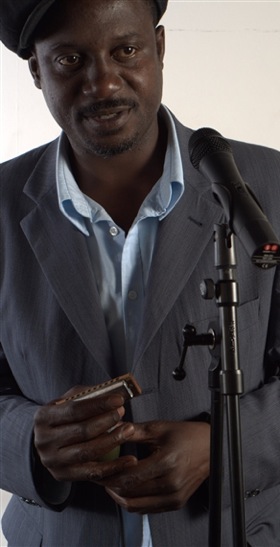 “I started out busking and I still do. It leads to me getting quite a lot of my work including a booking for a wedding,” he says at the BBC Radio 3 website, where you can listen to Man Shot Down played by Linton’s Blues Vibe. “Since the Station Tavern in Ladbroke Grove, west London, closed it’s been even harder to get gigs. You’re more likely to find me busking on the Underground.”

The superb video below by the independent company Echo Productions was filmed live at the Cluny in Newcastle for a series of films called Gettin’ the Blues and features an introduction by drumming master Sam Kelly of Station House. The Echo caption says: “With his Blues Vibe combo, Errol Linton has always kept the legacy of Little Walter and Sonny Boy Williamson sounding raw, fresh and above all, British, in a strange offbeat way. Reggae lilts and licks are salient features of Linton’s music. His albums for Ruby Records, Vibin’ It and Roots Stew, have become British blues milestones.”

➢ Martin Chilton reviewed Linton’s third album Mama Said (Ruby Records) at Telegraph online last June: “Hooked On Your Love is a tribute to his wife Maggie (a London bus driver for many years) and Through My Veins is a celebration of London. Both work well…” etc

➢ Listen to six rootsy numbers at Errol Linton’s MySpace page, where details of upcoming shows include a JazzFM broadcast from the glamorous Boisdale restaurant in Canary Wharf on Jan 25.