➤ Maxine and Marr: heard the deeply serious tale about the actress and the rock star?

Maxine Peake and Johnny Marr: “You can’t avoid homelessness in Manchester. It touched us both”

Marr: “There are so many things about being working class that never leave you entirely. A certain gratitude. A kind of humility, whether it’s forced on you or not. You could even call it guilt, I guess: working-class guilt.”

“There is a guilt, yeah,” says Peake. “A friend said to me, ‘Are you sure you’re not a Catholic? ’Cos you’re riddled with guilt.’ It’s tied up with a work ethic. You’ve got to be seen to be grafting for what you’re doing. You know what I mean? Constantly.”

“ When the musician Johnny Marr met and the actor Maxine Peake in 2014, they “clicked straight away”, bonding over a mission to bring back socially conscious art. The first fruits of their partnership are now about to be released: a five-minute piece entitled The Priest, which has been turned into a short film, co-directed by Marr, set in the centre of Manchester, as a vivid first-person account of homelessness. Here they talk about shamanic rock stars, working-class guilt and how their spoken-word album about homelessness strives to be a modern Cathy Come Home. . .

Marr says of Peake at one point: “I’ve actually met someone who probably works even more than me, if that’s possible,” and Peake’s résumé suggests he’s not wrong. Next year will see the release of Funny Cow, in which she stars as a female standup trying to push her way through the grimness of 70s Britain, as well as the staging at the Royal Exchange of Queens of the Coal Age, the play Peake has written about the true story of four women resisting the closure of a Yorkshire coalmine. . . ”

PLUS MARR ON THE M-WORD

“ Marr says he was “crushed and heartbroken” by the vote for Brexit, whereas his former creative partner Morrissey seemed to rejoice in it. Though Marr has remained firmly on the political left, Morrissey now seems to champion the reactionary right. “I’ve stayed the same. I’ve never changed. But … people tend to forget that it was 30 years ago that we were in a band together. Stop and think about it: 30 years. It’s a long time. So I honestly don’t care very much. . . ” / Continued at The Guardian online 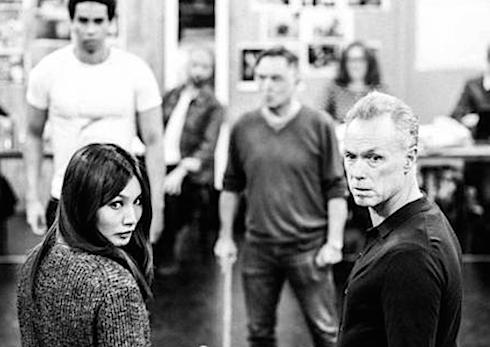 Gemma Chan as Ruth, with Gary Kemp as Teddy, rehearsing for The Homecoming at Trafalgar Studios in London. Photograph by Matt Humphrey

➢ Gary Kemp interviewed by Nick Clark in The Independent, 10 Nov, before he opened this week in Harold Pinter’s The Homecoming at Trafalgar Studios:

“ The play, set in 1965 was written when working-class people didn’t cross into celebrity, or cross classes. Kemp can empathise with the character who left his working-class roots and found home alien upon his return. “I went to grammar school and things became different, more middle class. My parents were definitely working class. My dad was a printer.” He said: “I get that thing about coming home and having a different language to your parents and sometimes using it against them and sometimes feeling terrible because of that.”

Today, he feels class restrictions remain visible, particularly in the acting world. It is, he said, “utterly class orientated. It’s ironic really because it’s incredibly liberal but underneath that facade there lies this need for Oxbridge, a need for the understanding of literature and a need for received pronunciation. Working-class actors are condemned to sitcoms and soap.” He pointed out that the production’s director Lloyd is working class. “That’s as rare as hen’s teeth” . . . ” / Continued at The Independent online

UPDATE: REVIEWS OF THE HOMECOMING

➢ Michael Billington in the Guardian, 23 Nov:
“ Fifty years after its London premiere, Harold Pinter’s play continues to puzzle, astonish and delight. Far from treating it as a revered theatrical specimen preserved in aspic, Jamie Lloyd’s excellent revival offers a fresh approach to the play without in any way violating the rhythms of Pinter’s text. . . The Homecoming retains its hold over our imaginations. It can be seen as a Freudian play about sons filled with subconscious Oedipal desires. It can equally be seen as an ethological study of a group of human animals fighting over territory. ”

Gemma Chan as Ruth, with Gary Kemp and Ron Cook, in The Homecoming at Trafalgar Studios. Photograph by Marc Brenner

➢ Dominic Maxwell in The Times:
“ Half a century after it first put Harold Pinter at the forefront of British drama, this 1965 play can still leave audiences provoked, puzzled and, finally, pleased. With its stark but colourful expressionist staging, its swirling bursts of Mod music and its sharp Sixties threads, this is Pinter goes Kafka, domestic drama goes haunted-house horror.”

➢ Dominic Cavendish in The Daily Telegraph:
“ Welcome back to Pinter-land, a world of inescapable disquietude which, in Jamie Lloyd’s stripped-back 50th anniversary revival of The Homecoming, is more Hades than Hackney. The gender politics of the play make it Pinter’s most problematic major work. It’s not constructed to invite “debate” – you’re meant to submit to its strange, atavistic logic. . . In broad terms, Lloyd delivers an evening that is intense, committed and often – because of the dialogue – darkly funny. ”

➢ Quentin Letts in the Daily Mail:
“ Those with a taste for bleak, absurdist, sexist fantasy will find their needs adequately catered for by the latest Jamie Lloyd production at London’s Trafalgar Studios. . . Pinter’s language is always to be savoured, his patter of lower-middle class cliches so astute. References to Humber Snipes and jam rolls and London Airport and flannel vests evoke an era. Was he ahead of his time in envisaging a career woman liberating herself from a lifeless marriage? Or was bedhopper Harold working off a little fantasy about a woman too free with her favours? I incline to the latter view. ”