◼ TOM STOPPARD’S MOST PERSONAL PLAY YET opened this week in London and detonated a mighty thunderclap of profound drama. I was not alone with tears streaming down my face when the curtain fell at Wyndham’s Theatre and many of us sat in our seats stunned. Heavens, even our greatest living playwright himself admits he has sat sobbing in the stalls during previews, as he did while writing the final scenes. “Nothing I have written has had that effect on me,” Stoppard told Radio 4’s Front Row on Tuesday about the play that proves more heart-wrenching than any of his previous 30.

Another gifted collaboration: Marber and Stoppard in rehearsal

Though named after Leopoldstadt, the poor Jewish district of Vienna, the play is set on the posh side of town. It is monumental in scale and epic in emotion. Its ensemble of 40 accomplished actors headed by Adrian Scarborough, Faye Castelow, Caroline Gruber and Ed Stoppard (yes, son) explore the traditions and fortunes of an extended cosmopolitan family through the first five decades of 20th-century history, made flesh with more harrowing detail and revealing dialogue than most of us could imagine or would want to when the jackboot of the Third Reich arrives. While a clock ticks loudly.

Untypically for Stoppard we hear less of his usual glittering wit and fewer laughs, while those that spasmodically do surface reflect Vienna’s intellectual achievements in art, maths, music and Dr Freud’s new-fangled psychoanalysis.

A glimpse of wit from the play: “Today’s modern is tomorrow’s nostalgia: we missed Mahler when we heard Schoenberg”

The bedrock is memory. Questions are raised about identity and heritage in a city and an era when Jews and Catholics happily inter-marry. Director Patrick Marber illuminates the interwoven branches of family trees as deftly as he did with the preposterous though mostly real life stories of Lenin, Joyce and Tzara that made his 2016 revival of Stoppard’s Travesties its wittiest production yet. 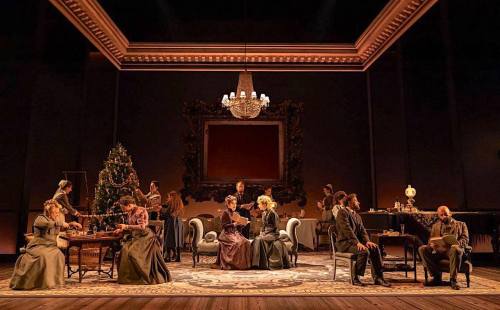 Leopoldstadt the play: Jewish and Catholic families celebrate Christmas in the Vienna of 1899

Leopoldstadt is the nearest thing to tragedy written by the 82-year-old playwright. It also features himself in the character Leo who is aged 24 in the final scene set in 1955, a caricature of English privilege who has grown up in Britain, having arrived at age eight, as Stoppard did, after being whisked away from the Nazis in Czechoslovakia where he had been born Tomas Straussler. His four grandparents all died in concentration camps, though Stoppard only discovered his Jewish heritage relatively late in life owing to his mother’s reluctance to revisit the past.

The play has been years in gestation and might possibly be Stoppard’s last. For its eloquence, prescience, intimacy and empathy, it will stand as a gloriously moving testament to his humanity.

➢ Leopoldstadt runs at the Wyndham’s theatre, London, until 13 June

At the premiere of Leopoldstadt: Sir Tom Stoppard and wife, Sabrina Guinness

REVIEWS THE MORNING AFTER

➢ Raising the emotional voltage, the dramatist puts a version of himself on stage – reviewed in The Observer