“My favourite mid-80s muse”: Derek Ridgers signs his book for singer Sherrone from the 1988 band Savajazz

❚ DEREK RIDGERS BLAMES PUNK for turning him from a self-confessed pop fan who photographed performers into a considered photographer in 1976. “Almost overnight,” he writes, “the audience became more photogenic than the bands.” He didn’t stop shooting Jagger, Clapton, Richards, Ringo, Diana Ross, James Brown, the Pet Shops, Johnny Depp and their showbiz pals who are of necessity brazen exhibitionists. But this softly spoken London-born art-school graduate did then develop the knack of persuading life’s everyday misfits, clubland weirdos and sexual eccentrics to pose for uninhibited and seductive portraits that came to sum up the essence of their individuality.

Ridgers says his latest book, with its understated one-word title Photographs, is “my masterwork – my best photographs from the last 45 years”. In large-format hardback, exquisitely printed so that the ink provides the sheen on otherwise matte paper, its 240 pages capture an astonishing spectrum of moods and lifestyles.

Shapersofthe80s at the party – click any pic to enlarge all in a slideshow: 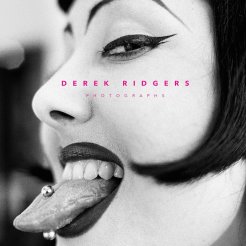 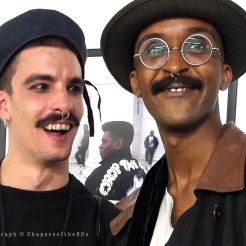 Davide Meneghello with Abdula Jama, Borough Market’s Gentleman Barista, here in front of a photo of Troublefunk in Washington 1987 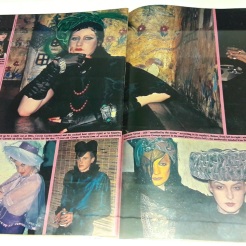 Ridgers’ first photos of the agenda-setting Blitz Kids, published in the Sunday Times Magazine in April 1980 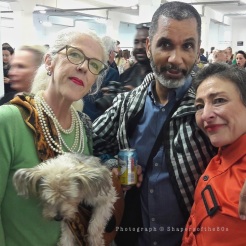 As an outsider looking in, his photographer’s eye sets out to find people whose appearance is uniquely striking or simply different, yet his instinct is to bring about “a moment of stillness and quiet contemplation” before his camera. By contrast, his book’s printed pages set unfamous showoffs (starting with cover-girl Michelle Carr) in competition with international celebrity egotists. This can create witty juxtapositions of subject yet there’s not an ounce of banality or cynicism. The most powerful images nail the internalised apprehension of the homeless and of some Quite Important People too: study the faces of Peter Cook, Don McCullin and Dennis Hopper; and unknowns such as the Deadhead, the Skin women, Sofia Staks and assorted skinheads.

As Ridgers tactfully navigates all extremes of id and ego, you’re likely to be surprised by how so many individual portraits, such as those of NWA and Snoop Dogg and even Kylie, arrest your attention, as the tragic Tuinol Barry’s has done in earlier books, and likewise Babs, the skinhead girl spotted in Soho in 1987. Ridgers says now of Babs, who had been through a children’s home: “We hardly spoke. Somehow I think we had a connection – even if it was only for 1/125th of a second. We were probably both outsiders.”

Across these varied social camps, note how few people smile at the Ridgers camera: across all these camps, the next page can reveal a real tear-jerker.

Shapersofthe80s at the party – click any pic to enlarge all in a slideshow: 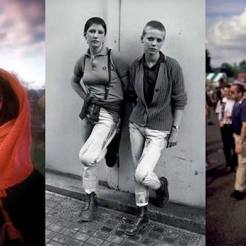 The Ridgers subjects: from pop stars, to skinheads, to uninhibited eccentrics 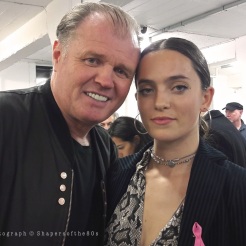 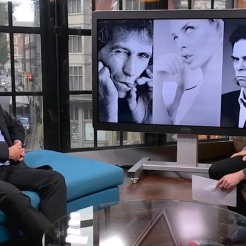 Ridgers giving an interview to London Live TV this week 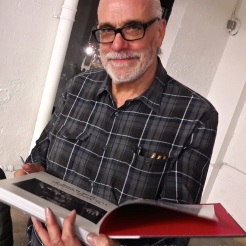 Our hero: he says his latest book is “my masterwork”

The Old Truman Brewery, London E1 6QR, is displaying selected images from the Ridgers book, curated by Faye Dowling to include an archive of original magazines such as i-D and The Face. It is open from 5 to 7 October, and our slideshows record an amazingly retro book launch party when faces from Derek’s past caught up with him. Derek Ridgers Photographs is published at £34.95 by Carpet Bombing Culture

➢ In one of Ridgers’ best interviews yet, this week’s Huckmag asks: What’s changed? – “About the only thing that’s changed during my lifetime is that there are different platforms now, mainly the internet. Once upon a time, when you bought a new outfit, you couldn’t wait to get out and show yourself off in it. Nowadays you never have to leave the house; you have Instagram.”

➢ Previously at Shapers of the 80s: Ridgers casts an honest spotlight on the birth of punk