2016 ➤ Prince Rogers Nelson: his raunchy earliest videos and his last

➢ Above: For his first TV performance in January 1980 Prince sports zebra-print underwear, black leggings, stack-heeled boots, and long hair giving us the first two tracks from Prince the album, I Wanna Be Your Lover and Why You Wanna Treat Me So Bad. On NBC’s The Midnight Special host Wolfman Jack says: “There’s nothing our next guest can’t do. He arranged, produced, composed, and performed his last album entirely by himself.” 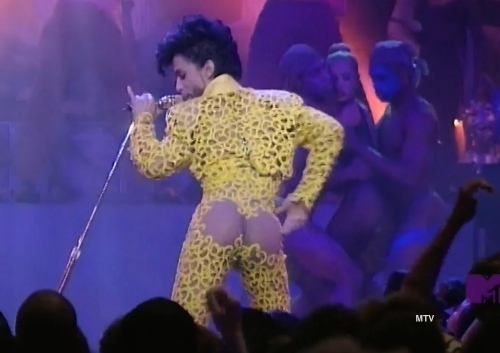 Prince’s 1991 MTV Video Awards performance of Gett Off with The New Power Generation might be the sexiest thing ever aired on TV. Click on pic to run video in new window

Grammy Awards 2004, on video: Another killer rendition of Purple Rain with Beyoncé before duetting in Baby I’m a Star

➢ Previously at Shapersofthe80s:
Prince RIP: ‘A funny cat’ and ‘sole authentic genius’
of the 1980s