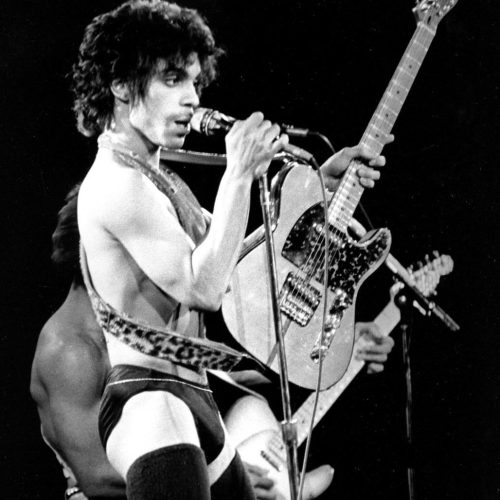 1980: How Prince unveiled himself in Detroit months before his UK debut. His Dirty Mind album stirs controversy, while Uptown makes it to No 5 on the US R&B chart. (Photograph by Leni Sinclair)

➢ Prince was to the pop music of the 1980s what David Bowie had been to that of the previous decade, its sole authentic genius – The Telegraph

➢ The unique and endlessly creative artist Prince has died, leaving behind him a gaping hole in musical genres as diverse as R&B, rock, funk and pop – The Guardian

➢ Prince, one criticism runs, was too talented. Ideas flowed through him like rain passing through a leaky roof – The Economist

Officialspikelee at Instagram: “I Miss My Brother. Prince Was A Funny Cat. Great Sense Of Humor.”

➢ So many people we interviewed told us hilarious stories about Prince. He was the video artist with little use for the video industry. Some loved him; others had quite the opposite reaction – Billboard

➢ Prince in his own words: “You have to live a life to understand it” – Famed for his gnomic utterances, but when he opened up, his remarks could be startlingly candid – The Guardian 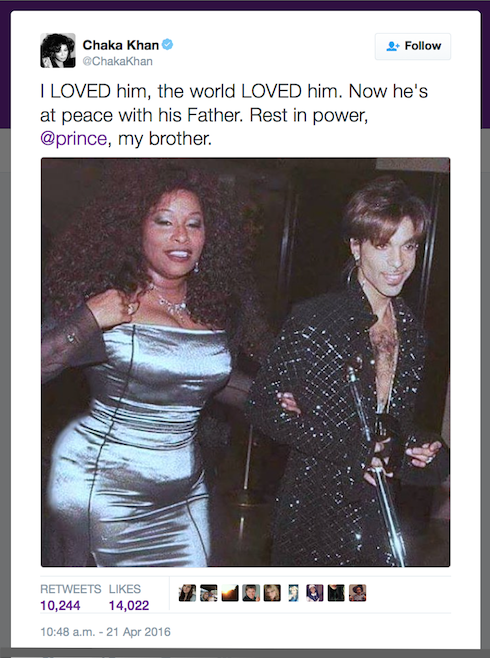 Quincy Jones: “RIP to prince… a true artist in every sense of the word. Gone way too soon.”

Mick Jagger: “Prince was a revolutionary artist, a great musician, composer, a wonderful lyricist, a startling guitar player… but most importantly, authentic in every way. Prince’s talent was limitless. He was one of the most unique and exciting artists of the last 30 years.”

Lenny Kravitz: “My musical brother… My friend… The one who showed me the possibilities within myself, changed everything, and kept his integrity until the end, is gone. I am heartbroken.”

Frank Ocean: “He was a straight black man who played his first televised set in bikini bottoms and knee-high heeled boots, epic. He made me feel more comfortable with how I identify sexually simply by his display of freedom from and irreverence for obviously archaic ideas like gender conformity.”

Barack Obama, who was flying from Saudi Arabia to London on Air Force One when the news broke, said he was mourning along with millions of fans. “Few artists have influenced the sound and trajectory of popular music more distinctly, or touched quite so many people with their talent. As one of the most gifted and prolific musicians of our time, Prince did it all.”

EXCLUSIVE INTERVIEW WITH SHAPERS OF THE 80S

“ I met Prince in 1981 on his first UK trip when he was booked to play the Lyceum and faced a half-empty venue. In the Embassy club six days before, I spotted him standing quietly at the end of the bar on his own, while nobody else seemed to know who he was – and the occasion was after all Steve Strange’s 22nd birthday party, heaving with Blitz Kids. Prince was painfully shy yet intensely sexy and very receptive when I approached, clearly flattered that somebody in the place had put a name to the face (familiar from his Dirty Mind antics over the previous year). We chatted for a while, enthused about James Brown, obviously, but amazingly he also said he had laughed a lot at the new spoof version of Is That All There Is? by Cristina on the Ze label. Despite which, I can’t claim to have got a single quote from the quiet man of pop that was worth publishing! ” – Yrs Truly

Prince Rogers Nelson: uncovered on the cover of his 1988 Lovesexy album

Chuck D of Public Enemy: “He is walking music. He IS music.”

Alan Leeds, Paisley Park label president, speaking in 2011: “He has outpaced Madonna, he has outpaced Janet Jackson. There really isn’t another phenomenon on the planet like Prince these days.” 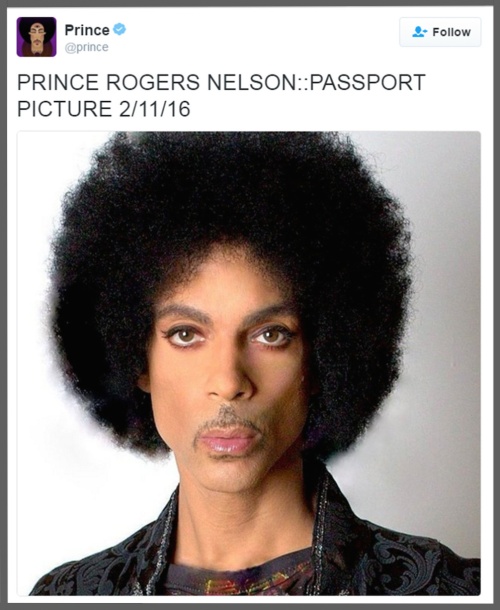 ➢ Prince’s lost Rolling Stone interview: “I don’t think about gone” – Ruminating on sex, music and death in a previously unpublished Q&A from 2014. . . “I can take you out there and hit this guitar for you, and then what you’ll hear is sex. You will hear something where you’d run out of adjectives like you do when you meet the finest woman.”

“I have a couple Revolution albums in the vault and two Time albums, one Vanity 6 album – and tons of stuff recorded in different periods.”

➢ Accidental overdose – CNN: “Toxicology tests for Prince concluded that the entertainer died from an accidental overdose of the opioid fentanyl, according to a report on his death by the Midwest Medical Examiner’s Office. Fentanyl, prescribed by doctors for cancer treatment, can be made illicitly and is blamed for a spike in overdose deaths in the United States. It is 25 to 50 times more potent than heroin and 50 to 100 times more potent than morphine, according to the U.S. Drug Enforcement Administration. . .” / Contd at CNN

➢ Music legend Prince was killed by an overdose of the powerful painkiller fentanyl – NBC News: “Fentanyl is a synthetic opioid up to 100 times more potent than morphine that is used for severe pain such as advanced cancer, according the Centers for Disease Control. Although it can be obtained by prescription, many overdoses are linked to illegally made versions of the drug, officials say. . . ” / Contd at NBC News

➢ Previously at Shapersofthe80s:
2014, Prince live in London puts the afro back in fashion!