➤ 40 years on from Abba, Austria fields a bearded drag artist for Eurovision

Conchita aka Tom: a bearded lady in the Eurovision Song Contest in Copenhagen

❚ THE PRIVATE PERSON TOM NEUWIRTH was born in Austria in 1988 and the art personality Conchita Wurst in 2011, the same year Tom graduated from the Graz School of Fashion. In last night’s second semi-final of the Eurovision Song Contest, the bearded drag performer Conchita won her place to represent Austria in Saturday’s final by singing what could pass gloriously as a Bond theme, Rise Like a Phoenix.

The homophobic backlash could have been predicted from conservative nations such as Ukraine, Belarus and Russia where petitions have urged her removal from the competition. Russian politician Vitaly Milonov called her a “pervert” adding: “It is not normal but a person cannot be punished in Russia for being homosexual, or to live with a dog, with a horse, with a sheep, whatever.”

Ms Wurst answered her critics: “I can only say ‘Thank you for your attention’. If this is only about me and my person, I can live with it. I’m just a singer in a fabulous dress, with great hair and a beard.

“I created this bearded lady to show the world that you can do whatever you want,” she said at a press conference in Copenhagen. Although the German word Wurst routinely means “sausage”, its idiomatic meaning is “irrelevant” so signalling that Conchita’s sexuality is a non-issue. She makes a statement for tolerance and acceptance while 25-year-old Tom’s motto is: “Be the best version of yourself rather than a bad copy of someone else.”

➢ Live video meet and greet with Conchita Wurst in Copenhagen: “Shoot for the moon. Even if you miss you’ll land among the stars. That’s the way I live” 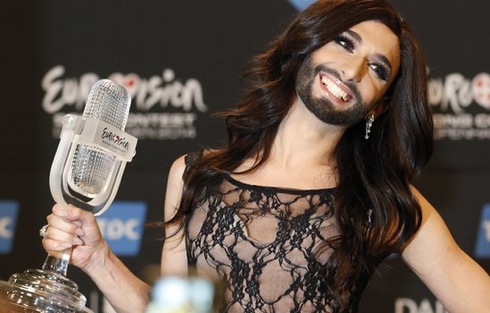 Conchita Wurst victorious: she was second favourite to win going into the contest (PA)

➢ BBC News reports: Austrian drag act Conchita Wurst has been crowned the winner of the 59th Eurovision Song Contest: “The singer, whose real name is Tom Neuwirth, won with the song Rise Like a Phoenix, collecting 290 points. The Netherlands finished second with 238 points, with Sweden in third place with 218 points. Wurst had been the second favourite to win behind Sweden going in to the competition, with many predicting the act could be too divisive among voters. However she was the clear winner, with her victory announced after 34 of the 37 countries had submitted their scores.”