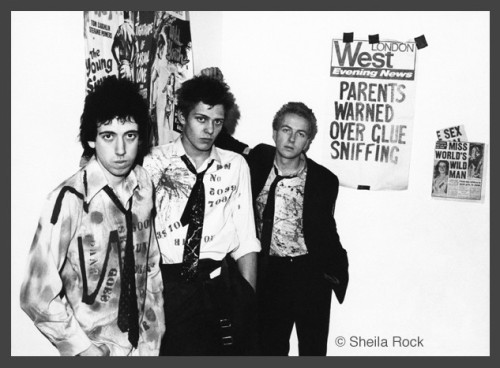 The Clash in 1976. Photographed by Sheila Rock

❚ FOR THOSE WHO SURVIVED the mid-70s, punk was the anti-fashion UK phenomenon that transformed contemporary culture. Now “a blistering 1976-80 photo-hoard” of mostly unseen pictures has been published as a 272-page photobook. Punk+ by Sheila Rock – an American in London – chronicles both designer and street styles that impacted on fashion, society and politics, including Vivienne Westwood’s shop SEX as well as BOY, Robot and Acme Attractions. The collection, which had been stored in a box in Rock’s garden shed, includes formative images of The Clash, Chrissie Hynde, Paul Weller, The Jam, Generation X, Siouxsie & the Banshees and The Sex Pistols.

Paul Simonon of The Clash says: “This book is a great photographic record of a major shift in British street fashion.”

Sheila Rock arrived in London in 1970 to join the David Bowie circle, and it was her friend and Patti Smith guitarist, Lenny Kaye, who took her to a gig by the then-unknown Clash. “That was the first time I was introduced to the punk scene,” she says. “I decided to take my Nikon camera with me and my photography career began.” Her photographs of showbiz performers and musicians have been published in titles from Vogue to The Sunday Times and can also be found in London’s National Portrait Gallery. This month her pix will also be showing in the Punk: Chaos to Couture exhibition at The Metropolitan Museum of Art in New York.

Rock’s career took off in 1980 in The Face, the 80s style bible published by Nick Logan, who describes Rock as “self-effacing but sweetly persuasive” in the preface to PUNK+. He notes how she refined her images to capture a style that portrayed what her subjects wanted to personify. She often achieved this better than they understood themselves.

Tonight the book was launched with a two-week exhibition of Rock’s photographs at Brown’s high fashion store in London, and a further show runs for a month from May 28 at Rough Trade East, where there’s also a book signing.

Mojo Magazine reports: “Sheila Rock’s PUNK+ book presents a blistering 1976-80 photo-hoard. The striking and fascinating photo-book collects almost 200 images of groups including The Subway Sect, Eater, Buzzcocks, The Clash and the Sex Pistols, plus documentation of the rapidly changing fashions of the late 70s. She estimates 90 per cent of the shots have never been seen, and that 85 per cent were self-motivated experiments rather than work commissions. Those enthralled by shifts in vintage youth styles will also delight in the images of unselfconscious punks, such as the young Jam fans who mixed the Weller look with the safety-pin aesthetic.”

➢ Another exhibition of photos by Sheila Rock runs May 28–June 30 at Rough Trade East, 91 Brick Lane, London E1 6QL. On May 29 at 7pm Sheila will be joined by Don Letts and Jeanette Lee plus special guests for a Q&A event and afterwards a signing session for her book Punk+.