2012 ➤ Grace Jones celebrates the day she met the Queen, two months on

❚ IT WAS A MEETING OF TWO QUEENS in their own realms… This isn’t a new photo but it was published yesterday on Grace Jones’s Official Facebook page as if the singer is suddenly chuffed to bits with the moment it captures. Just as chuffed seems to be the expression on the face of one’s monarch as HMQ greets Grace backstage following the star-studded Diamond Jubilee Concert on June 4. The official Facebook caption marks the two-month-old occasion: “It was an honour to play a part in the Queen’s Diamond Jubilee celebrations with such an incredible band… two months ago this weekend.”

Between the regal pair, the photo captures the terminally unfunny comedian Rob Brydon giving his impersonation of the nation in shock. Other videos record how his gags died the death on the Jubilee stage, but Grace’s video continues to make compulsive viewing as she twirls a hula-hoop (Why?) while singing Slave To The Rhythm, her biggest hit and title track from her triumphant seventh studio album, produced by Trevor Horn in 1985. Priceless cutaway shots of the royal box as Grace performs might have come straight from the Mel Brooks movie satire, The Producers.

The Jamaican-American singer, supermodel and actress Grace made her home in Britain after settling down with music producer Ivor Guest, 4th Viscount Wimborne. Didn’t she do well?

Grace’s showstopper: This BBC video cutaway to the Royal Box during Grace Jones’s orgasmic act is a dead ringer for the gobsmacked audience watching Springtime for Hitler. How many astonished princesses, archbishops, ex-prime ministers and director-generals can you count? 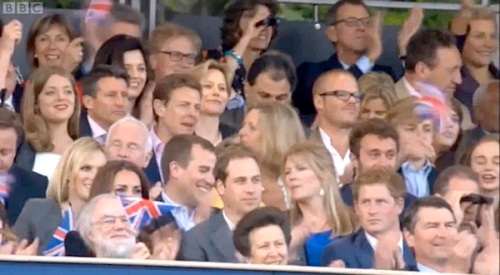 Grace’s finale: Another cutaway as Grace bids farewell to her audience and becomes confused about the occasion: “We love you! Happy birthday, our Queen.” How many humourless heirs to the throne and bemused princesses royal can you count?