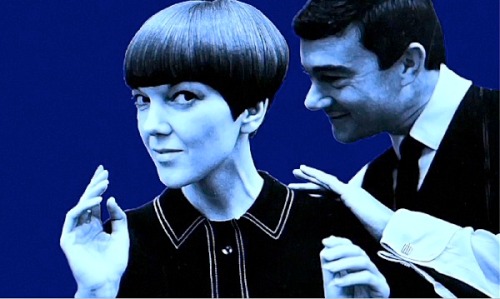 Comeback 1975: Vidal Sassoon between two contrasting examples of his hairdressing for a teach-in at the Albert Hall, where he returned to hairdressing after a five-year break. (Photograph by Tim Graham / Getty)

➢ The Daily Telegraph reports the death at 84 of celebrity hairstylist Vidal Sassoon, whose 1960s wash-and-wear cuts freed women from the tyranny of hairspray…

“ Vidal Sassoon, who was found dead at home on Wednesday, was at the cutting edge – literally and metaphorically – of hairdressing. His sharp, geometric, low-maintenance 1960s hairstyles revolutionised his craft, sounding the death knell for the stiff, set hairdos of the 1950s. An astute businessman, he made a fortune from his salons and products, and became a household name. “I wanted to eliminate the superfluous and get to the basic angles of cut and shape,” he said… ” / continued online

+++
❏ Craig Teper’s 2010 documentary Vidal Sassoon: The Movie follows the true rags-to-riches tale of how a boy from a London orphanage went on to open his own Bond Street salon in 1958 and — influenced by the Bauhaus designs he had studied — he create the “shape” that became his signature cut, the five-point bob. It revolutionised hairdressing. His geometric wash-and-wear cuts marked the end of the beehive and the bouffant hair styles of the 50s. Admirers included the Duchess of Bedford, model Jean Shrimpton, actor Terence Stamp, and film star Mia Farrow. In 1963 he devised the classic “bob” for fashion designer Mary Quant, who called him the “Chanel of hair”. By 1964 he’d gone international by opening his first salon in New York. 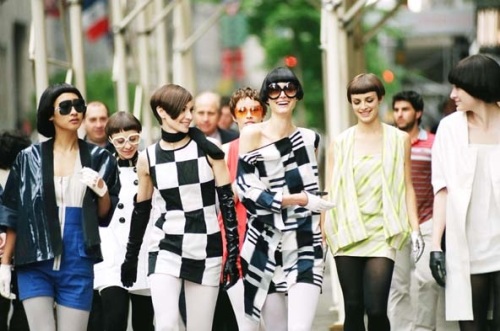 Sassoon The Movie: the London crimper freed women from 50s bouffants by pioneering the low-maintenance hairstyles that defined the 60s