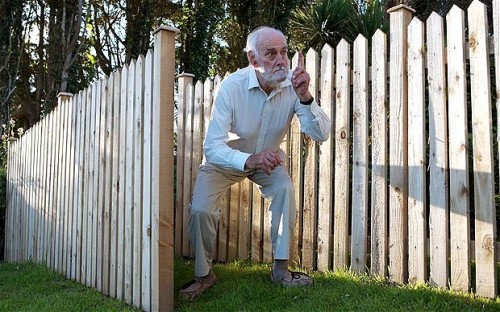 ❚ N F SIMPSON, THE DRAMATIST, died this week aged 92. The Observer critic Kenneth Tynan dubbed Simpson “the most gifted comic writer the English stage has discovered since the war” after seeing the double bill of A Resounding Tinkle and The Hole  in 1958. And after One Way Pendulum (1959), he suspected Simpson of possessing “the subtlest mind ever devoted by an Englishman to the writing of farce”…

“ … His focus on the surreal was influenced by The Goon Show and in turn influenced Monty Python and Peter Cook… Simpson was one of the four principal writers to establish the English Stage Company’s influential regime at the Royal Court Theatre in the late 1950s. The others in that first batch were John Osborne, John Arden and Ann Jellicoe. But in a movement whose central work was Osborne’s Look Back In Anger, Simpson was spiritually an outsider. ”

“ The playwright NF Simpson, was generally identified with the Theatre of the Absurd movement alongside Eugène Ionesco, Arthur Adamov, Samuel Beckett and Harold Pinter. But Simpson was peculiarly and singularly English in his absurdism. He turned suburban characters into weird chatterboxes and language into highly imaginative chop logic, and mixed a comic brew that derived more recognisably from the worlds of Lewis Carroll, W S Gilbert and the Goons, without the puerile edge that came along with Monty Python… ”

“ The plays of N F ‘Wally’ Simpson, were hilariously subversive, yet masked a deeply philosophical mind … He was often compared with Eugène Ionesco. But I always thought he belonged to a deeply English tradition of word-spinning, logic-twisting absurdity. Simpson’s real ancestors were Lewis Carroll, Edward Lear and the Goons. His legatees were Peter Cook, the Monty Python gang and the Goodies… ” 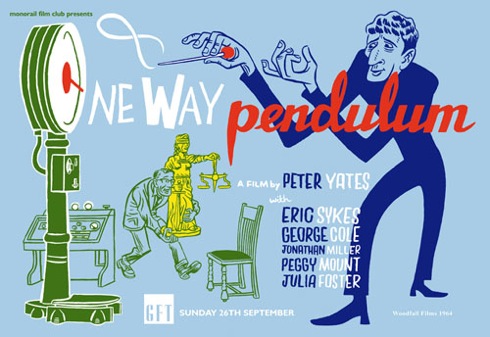 ❏ This short clip from the 1964 Woodfall film of One Way Pendulum only hints at the Simpson universe. John Cleese saw the film in a cinema in Weston Supermare and called it a true classic of surrealist comedy. It is directed by Peter Yates with Jonathan Miller as the dotty Kirby, the son of a dotty father (Eric Sykes) in a dottily obsessive suburban household. Kirby retunes a choir of Speak-Your-Weight machines and trains them to sing the Hallelujah Chorus. All except one obey his bidding.

Simpson’s vision directly inspired a whole generation of comedy in the UK from Dick Lester’s Beatles movies (1964-5) to the Monty Python TV series (1969-74) and beyond. It was One Way Pendulum that took Simpson from the Royal Court theatre into the West End and in 1988 Jonathan Miller revived it at the Old Vic. Simpson’s final play, If So, Then Yes, was staged only last year.

❏ David Quantick appraised playwright N F ‘Wally’ Simpson as one of the foremost absurdists of the 20th century. The documentary featured material recorded at a workshop for a new play, If So, Then Yes, his first full-length piece in 30 years. It charts a day in the life of octogenarian writer Geoffrey Wythenshaw, who sits down to dictate his autobiography from the comfort of a retirement home for the upper crust. After its Royal Court reading it then played at the Jermyn Street theatre during September 2010.