Frost is in the air at the height of their success in 1966: Walker Brothers John and Scott at front, with drummer Gary playing peacemaker

◼ IN 1966 JOHN WALKER was one of the biggest heart-throbs on the British pop scene as joint vocalist in a trio of sexy American dudes called The Walker Brothers. Their No 1 UK chart hits were the Bacharach and David song Make It Easy on Yourself and six months later, The Sun Ain’t Gonna Shine (Anymore) by Crewe and Gaudio. When John Walker died from cancer this weekend (Saturday May 7, 2011) at the age of 67, his former bandmate, the drummer Gary paid tribute to John as founder of the group and its original lead singer: “He was also a fantastic guitarist which a lot of people didn’t realise. He was a compassionate song-writer and a gentleman with lots of style.”

Sadly, as far as Google search can reveal, the third Brother, Scott, has apparently chosen to remain silent in the wake of John’s death.

Having relocated to Swinging London in 1965 when the UK ruled pop music, the soft-crooning Walkers were quickly besieged by frenzied female fans, whose adulation increased pressures emerging within the band. Scott’s soaring baritone voice established him as the lead singer, and the management persuaded both vocalists to abandon instruments onstage, leaving John stripped of a major aspect of his live performance. The band split awkwardly after a miserable farewell UK tour in 1967 which itself was hijacked by the “obscene and vulgar” supporting act, the Jimi Hendrix Experience (Jimi’s own quote). Scott’s disgust is vividly described in the 1994 biography Scott Walker, A Deep Shade of Blue.

In his 2009 book The Walker Brothers: No Regrets, co-authored with Gary, John Walker wrote: “Most people don’t realise that it was I who chose the songs that would become The Walker Brothers’ biggest-selling singles… I was aware that things had changed a lot: Scott had become the lead singer of the group… Now that he was singing lead, I enjoyed the opportunity to create some unusual harmonies.” Yet the new pecking order wrankled.

The charismatic frontman Scott Walker embarked on a solo career, putting out five albums between 1967 and 1969 with much commercial success, despite his confused mission to shake off the trappings of pop stardom. He had settled in Europe and during the ensuing decades adopted the lifestyle of a recluse, while his broody, inspirational voice and commitment to “serious” post-pop music has yielded further landmark albums and sustained a cult following worthy of a guru. 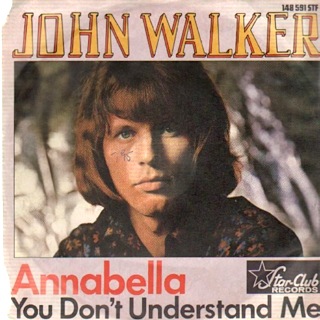 After the split, John released a single, Annabella, co-written by Graham Nash, which was a Top 30 hit in the UK, and an album, If You Go Away. Itchy feet and eager media reunited The Walker Brothers in 1975, and the hot comeback group released No Regrets, a single and album which proved hits for the fledgling GTO label. Two more albums followed in London to bring the band’s studio total to seven. But Scott’s legendary stage-fright resulted in lucrative tour offers being turned down, much to John’s exasperation.

Over the next couple of years, Scott says, “Everybody got sick of each other again”, while according to John the trio “just drifted apart”, after which he returned to the States and Gary Walker settled in England, both to assume lower profiles as musicians and producers. John Walker became a publisher and ran a recording studio in California, and in recent years resumed touring Britain as part of an annual Silver 60s show. His last appearance was at Croydon’s Fairfield Halls in May 2010, ending a 12-date sprint only months before his cancer was diagnosed.

Just for the record, the Walkers were of course not really brothers but the stage name is how the world will remember John Maus, Scott Engel, and Gary Leeds. As a teenager John had worked with greats such Ritchie Valens, Glen Campbell and Phil Spector. As 21-year-olds in 1964, the three Californians came together in response to the feverish mid-60s pop scene where moptop hair and cheekbones to die for cast them as readymade pop idols. Their effortless balladeering backed by a huge lush orchestra brought to the UK pop charts much-needed sophistication, of the kind the US had in abundance, so success was less marked in their homeland.

There isn’t much good footage of The Walker Brothers live, but the Land Of 1000 Dances clip [above] from German TV in 1966 is sensational evidence of John’s own onstage talents as he emulates Jaggeresque gyrations (Gary on drums). Likewise, in the rarely seen clip from the California TV show Hollywood A Go Go in 1965 [V-0759, below, from 17 minutes in, with “Tiny” Rogers on drums], the rendering of Cottonfields displays Scott’s breathtaking insouciance on bass. He and John could easily pass for brothers and their simmering appeal is self-evident. Great moves by the studio audience, too.

In the end the tensions were always between John’s country instincts and Scott’s idiosyncratic wish not to be typecast as a popstar. (In an interview with me in 1967, Scott confessed that he drank a bottle of Scotch and a bottle of wine a day with the sole purpose, he claimed, of wanting to coarsen the voice he thought sounded too sweet.)

Mojo’s verdict on the Brothers’ 1967 album Images: “The swansong of America’s British chart crashers, too square for the freaks and too loose for the straights.” And of the second reunion album Lines (1976), AllMusic says: “Still uncertain of their true role in the exciting world of mid-1970s pop, the Walkers remained torn between the big balladeering which had served them so well in the past, and the more experimental (or, at least, new) stylings which Scott, at least, was imbibing elsewhere.” The Walkers made some great pop in their heyday, but were oh so vulnerable to the famously destructive power of “creative differences”.

+++
➢ Scott Walker has composed the music for a recital in music, dance and voice based on a Jean Cocteau monologue at the Royal Opera House’s Linbury Studio, June 17–25, 2011… The ROH preview says: “Jean Cocteau’s monologues provide the inspiration behind an evening of opera and dance from ROH Associate Artist Aletta Collins and director Tom Cairns. They explore the inspirational synergy of music, dance and voice along with Cocteau’s themes of possession and abandonment. In Duet for One Voice, a world-premiere, Collins re-imagines Cocteau’s monologue Duet for One Voice for dancers, with a newly composed score by composer Scott Walker.”

➢ 2019, Elsewhere at Shapers of the 80s: Tributes on the death of Scott Walker