Responding today to news of the death of actor Pete Postlethwaite, the former deputy prime minister John Prescott, has credited the 1996 film Brassed Off — about the struggles faced by a colliery brass band after the closure of their pit under a Conservative government — as the inspiration for a Labour regeneration programme for coalfield communities

❚ I FIRST SAW BRASSED OFF in June 1997. The story, loosely based on the Grimethorpe Colliery Band, was moving but it was Pete Postlethwaite’s speech right at the end that had a deep effect on me. His character, band leader Danny, after spending his life wanting to win the national brass-band trophy, symbolically turns it down because he knows it’s the only way he can get publicity for the 1,000 miners who were sacked from his pit…

➢ Continue reading Pete Postlethwaite: an actor who
made others act — by John Prescott at Guardian online

❏ Tribute — In 2008, Pete Postlethwaite fell victim to the director Rupert Goold in his absurd updating of Shakespeare’s King Lear at the Everyman Theatre in Liverpool. At the actor’s prompting the production was revised slightly before moving to London’s Young Vic in 2009. The staging still hit the heights of am-dram self-consciousness, but Postlethwaite’s performance [see video trailer below] rose above his surroundings to be intensely affecting, as an abject monarch who seemed more a vulnerable man of the people.

❏ Daniel Day-Lewis, who played Postlethwaite’s son in 1993’s In the Name of the Father (for which they both earned Oscar nominations), and co-starred with him in 1992’s The Last of the Mohicans: “Pos was the one. As students, it was him we went to see on stage time and time again. It was him we wanted to be like: wild and true, lion hearted, unselfconscious, irreverent. He was on our side. He watched out for us. We loved him and followed him like happy children, never a breath away from laughter.”

Postlethwaite was acclaimed for other performances in films such as Stephen Spielberg’s The Lost World: Jurassic Park, Baz Luhrmann’s Romeo and Juliet and Bryan Singer’s The Usual Suspects.

➢ A face we won’t forget — Pete Postlethwaite, who died on Sunday, was one of our finest actors. Guardian film critic Peter Bradshaw recalls the unwitting role he played in the Northern Ireland peace process
➢ Blessed with one of the most remarkable faces of any British actor this past half century — Daily Telegraph obituary 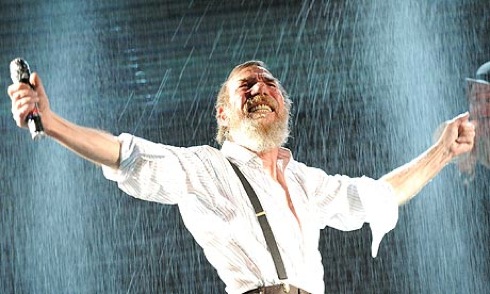