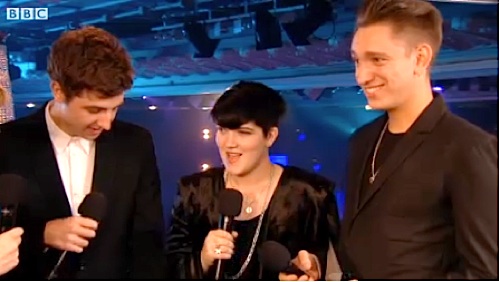 ❚ TONGUE-TIED, GANGLY, GAWKY and utterly lacking in stage presence — that’s the face of cool London in the 20-tens presented by The xx. This year’s £20,000 Mercury Music Prize was won tonight by the band of the moment, whose eponymous first album, xx, on the Young Turks label evokes a soulful yet haunting dreamworld of urban alienation. So musically spare are their songs — such as Islands, which instantly became Single of the Week on iTunes (UK) — that you can almost count the individual notes picked on guitar and synth. Their dark, hushed sound has been called “post-coital” yet they strenuously deny the lyrics are about sex. Which they are.

The Modfather Paul Weller was bookie’s favourite among the shortlisted best albums of the year which represent a dozen impressive strata of British musical tastes. Yet every web designer in Shoreditch, the creative media quarter of London, has been rooting for The xx since their album raised understated murmurs of approval in August 2009. By year’s end, Brick Lane habitués were declaring them “The Greatest Band of All Time”. No maybes, note.

This year, Karl Lagerfeld chose their track VCR for his Fall/Winter fashion show, then The xx were chosen by Matt Groening to headline two nights at All Tomorrow’s Parties, one of the annual unsponsored festivals in England which was curated by the Simpsons creator in May. The BBC made them the sound-track to its general election coverage, so well do The xx capture the 20-ten zeitgeist.

Arch is one word for the band’s style. Absorbing is another. It’s their artfully choreographed videos which can intensify the music’s emotional effect considerably more than the live performance, notably Saam’s black-and-white take on Islands [view below]. In public the trio are uniformly clad in nihilist black, but this is neither 70s Goth, nor 50s Left-Bank. Nor 30s Fascism, though redolent of it. Their merchandising comes in similar colourways from Ts to tote bags to skateboard decks to a £150 light box, all in black emblazoned with a bold white X. The motif is insistently present. Does it signify a vote? A negative verdict? The chromosome that determines gender? Or love, as in kisses after a lover’s signature?

The ubiquitous X is on all merchandising, here a lightbox for £150

A low-key Generation Y ethos underpins the band’s rise, from Romy Madley Croft and Oliver Sim polishing lyrics over IM, Jamie Smith improvising on an Akai MPC beat synthesiser that was a birthday present, recording in a garage the size of a bathroom, and doing their own production, to headlining their own international tour which continues through October in North America.

Both onstage at the Grosvenor House receiving the prize from musician Jools Holland and later being interrogated on TV by deejay Lauren Laverne, the trio of 20-year-olds who went to school together in south-west London were visibly in shock, lost for words, their heads bowed in painful shyness. Frontman and guitarist Sim said “Wow”. Twice. Vocalist and guitarist Madley Croft said “Aaah… erm” while keyboardist Smith couldn’t get a word in edgeways through the gauche silences. Romy eventually managed: “I genuinely wasn’t expecting to hear our name, genuinely, genuinely.”

Simon Frith, chairing the Mercury judging panel, declared the winning album to be “a record of its time” that “captures a sense of the uneasy times we live in” and has “an astonishingly coherent sense of itself”. He nailed it: “They have that urban soundscape where they are not exactly secure… That late-night feeling where you like the city and it’s exhilarating, but you don’t know what’s going to happen.”

Spookily they said much the same about Burial, the dubstep hero who attended the same comprehensive, the Elliott School in Putney, and was a Mercury Prize nominee in 2008. He too called himself “a low-key person”. Perhaps there’s something in the local water.

➢ The xx’s North American tour dates through to October