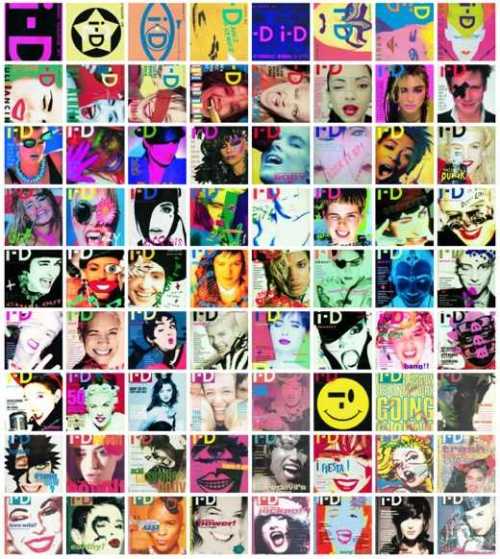 Launched August 1980: who’d have guessed that 72 covers and almost as many winkers later the magazine would have arrived at the end of its first decade?

❚ A MONTH AFTER i-D MAG’S LAUNCH in August 1980, cub-editor Perry Haines was bright-eyed and bushy-tailed, fresh from the St Martin’s fashion journalism course. Armed with such axioms as “Pitch and stitch dance hand in hand”, he was launching his club night at Gossip’s in Soho, calling it the i-D Sink or Swim night, admission £2.50. “We play 100mph dance music,” he said, meaning sounds like James White and the Blacks. “People are waiting for something to run with. They’re at the starting blocks.” Shapersofthe80s was there like a shot.

Launched as a quarterly in A4 fanzine format, economically printed in black-and-white and stapled, i-D was soon dubbed the UK “manual of style” for inventing the so-called straight-up more or less on the hoof: kids were photographed full-length, as and where they were found on the streets of Britain, then captioned down to the last thrift-shop nappy pin. Today editor-in-chief Terry Jones celebrates identity as the theme that has sustained his unique mag for three decades by turning the 30th birthday pre-fall issue of i-D over to the talented photographer Nick Knight, who was appointed an OBE in the most recent Queen’s birthday honours. It is one stunning run of superb black-and-white portraits of 200 people the mag believes are brainy, beautiful and downright gorgeous — from The xx, Phoebe Philo, Sir Paul Smith, Florence Welch to a rude Cerith Wyn Evans and a raunchy Vivienne Westwood, both enjoying their age disgracefully, plus three alternative cover stars epitomising this issue’s title of Then, Now and Next, Kate Moss, Naomi Campbell and Lady Gaga.

The key question is: How many of i-D’s 100 People of the 80s from Knight’s fifth anniversary shoot have made it into the 20-tens?! Uh-oh, only 12 found so far. Still counting.

Nick Knight, then and now, separated by 25 years: captured by yours truly during his first shoot for i-D, titled People of the 80s, on the magazine’s fifth anniversary ... right, this year’s self-portrait as one of the world’s most innovative fashion photographers, taken for i-D’s 30th anniversary issue which he also art directs. Photographs © Shapersofthe80s and Nick Knight