An exceptional cabaret performer called Taylor Mac hit London this week. He subverted not only theatrical conventions but several classic Bowie songs to glorious effect. His shimmering presence set up echoes of something a little bit itzy-Blitzy… 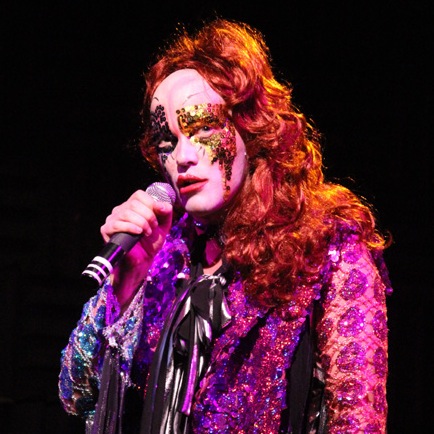 ❚ LET’S RECALL WHAT MADE THE BLITZ KIDS unique in 1980. Singer Andy Polaris said soon after: “Anyone who thought it was all a pantomime got the wrong end of the Pan Stik. Blitz people had to be larger than life. It was a compulsion. If it doesn’t possess you, you can’t acquire it.”

An evening within the orbit of London’s Blitz club superstars – and we’re talking about 50 people here – was more than entertaining. You were zapped with a very tangible electric shock – what we’d call today “sensory overload” – as if these exquisite, compulsive posers had revitalised Gilbert & George’s notion from 1969 of processing through the world as living sculptures. The Blitz Kids generated their own crackling versions of hyper-reality that defined the space around them. They included Kim, Julia, Judi, Melissa, Fiona, Jayne, Theresa, Myra, Scarlett, Clare, Michelle, Darla, Sade, Kate, Stevie, Naomi, Mandy, Helen, Jo, Perri and Christine . . . the Stephens Linard and Jones, Lee, John, Cerith, Simon, Iain, Andy, George, Marilyn, Wilf, Greg, Jeffrey, Christos, Graham, Neil, Dencil, Robert, the Holahs, the Richards Ostell and Sharah. A fair few other Blitz Kids, like Strange, Egan, Elms, Sullivan, Dagger, Haines, Ure, O’Donnell, Mole, Ball and Lewis, had the motormouth skills of energetic talkers and schemers who were, as we say today, “good in the room”. Above all, the best among them “made things happen” wherever they set foot. That’s why spending time with them was the best kind of fun – stimulating, argumentative and constructive, whether idling at a bar or bounding around the beach on Bournemouth bank holidays. 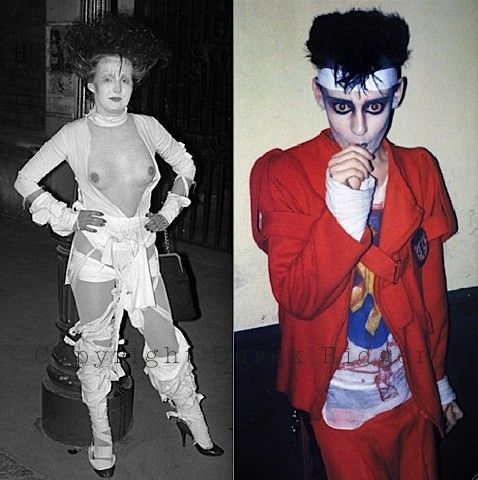 Doyennes among the Blitz Kids, 1980: Kim Bowen and Stephen Linard stamp themselves on that week’s zombie leitmotif. Photographed © by Derek Ridgers

Even so, what marked out the fashionistas especially was that, not only in the club, but in shop, café and bus, the style stars were constantly emitting auras of the force you imagined surrounding Dietrich or Garland or Bogart or Caine. There’s nothing accidental about style. It is by definition a considered stance. In the presence of the Blitz superstars you could hold up your hands and almost feel the crumpet-toasting tingle. Even jaded Londoners turned their heads when Kim walked the half mile from Warren Street to St Martin’s school of art swathed only in surgical bandages. Or when George paraded past Buckingham Palace as a helmeted and toga’d Britannia at the annual royal ceremony of trooping the colour.

Wherever there was a party, premiere, exhibition or club opening you’d see a dozen more such creatures who lived hyper-reality 24 hours a day… Lee perhaps as Nosferatu, Julia as Bride of Frankenstein, Fiona saying “Non!” to couture by wearing a grosgrain coat back-to-front, Sullivan as 1920s cad, blue-lipped Linard as 1920s flapper, Marilyn as, well, Monroe, Stewart as geisha boy, Theresa as Little Bo Peep, a part she played at work in the offices of the Daily Express where our paths often crossed.

Aplomb came naturally to Kim Bowen as the queen of the Blitz Kids. One night when some friends came back to mine after celebrating my birthday, Kim walked into the kitchen and said: “I’m not going to let you live with this wallpaper one more day.” She picked at the edge of a stiff vinyl-coated strip, printed with very 60s pepperpots and pans. Then she ripped it off the wall in one heave. The kitchen walls were bare within 20 minutes. Kim declared: “Minimalism, David, that’s you need.”

As time would reveal, the lead Blitz Kids outflanked not only their peers, but most of the copyists who followed their Bowie-inspired passion for change. You’d find the second-league clubbers at Studio 21 in Oxford Street, or in a back barrel at Birmingham’s Rum Runner – those were the self-proclaimed New Romantics you see dancing in the YouTube videos, and being photographed wearing too much of everything, from Boots No 7 to lacy frills. A couple of years after the Blitz caravanserai had passed, designer Fiona Dealey said candidly: “You look at these little Bat-people with it dribbling down their necks and you feel like saying, ‘Sorry darling, not enough loose powder’. The difference was that our make-up was stage slap, Leichner not Factor. The clothes came from a costumier, Charles Fox not Flip. Dressing for the Blitz was real theatre. It wasn’t just another uniform. You felt glamorous.”

Aha, real theatre! This is the realm Shakespeare championed as “an improbable fiction” and John Updike blasted as the “unreality of painted people”. A flesh-and-blood craft where the basic requirement is for a living audience to be watching living actors. The Blitz Kids fully understood what Shakespeare’s Player has to explain to Rosencrantz and Guildenstern in Tom Stoppard’s spoof version of Hamlet: “We’re actors. We’re the opposite of people.” Actors pledge themselves to the belief that somebody will be watching. Nothing to do with vanity. Entirely a means of confirming their identity. Ditto the Blitz Kids.

Masters of the comedian’s art: Max Wall and Ken Dodd

The digital natives (and the self-styled Neo Romantics) of Generation Z who today are being raised on computer shoot-em-ups and quaking cinema enjoy precious little exposure to live theatre, to the “magic” that emanates from the contract eagerly agreed between actor and audience – for the one to perform at the same time as the other watches. Only when, as one towering example, Sir Michael Gambon allows a Pinteresque pause to elapse onstage can auras crackle “in the moment” with sufficient intensity to be felt physically, and thrillingly, by a theatre audience. Gambon’s aura crackled like a fire god’s last Christmas in No Man’s Land, before a wrapt audience the day after Pinter its author had died.

Comedy is where the theatrical contract of give-and-take fights for life most ostentatiously. As you laugh helplessly at the veteran comic Ken Dodd’s rapid-fire patter, you needn’t know that he has subjected his live stand-up routine to a lifelong time-and-motion study that concluded he must hurl eight gags per minute at his audiences to ensure everybody laughs at least once every minute he’s onstage. 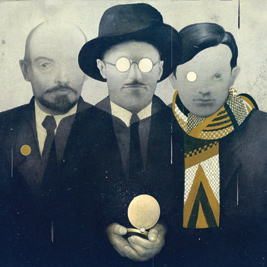 Travesties: what a coincidence that in 1917 the revolutionary Lenin, the novelist James Joyce and the Dadaist poet Tristan Tzara all happened to live in Zurich

In London in 1982 it was no less a pleasure to witness the top-of-the-bill variety legend Max Wall give wondrous live masterclasses entitled An Evening with Max Wall in which, aged 74, he laid bare how comedic timing works from one second to the next, how facial expression and vocal cadence, as well as silly walks can turn laughter instantly on and also off. Demonstrating with us as guinea-pigs how performer’s and viewer’s mutual responses keep each other on their toes.

The playwright Stoppard has spent his career writing pyrotechnic scripts that read wittily enough sitting on the page, but are transformed several hundredfold the moment they are enacted on the stage, by for example exploiting the improbability of time-warps where the actors and the action are rewound and rerun in “unreal time”, as in Travesties, his hilarious comedy of coincidence. His plays are overtly “about” theatricality, yet shrouded by the mischievous apologia that ultimately “It’s a mystery”.

GETTING BACK TO Taylor Mac, his little bit of itzy-Blitzy glitz
gives shape to all of the above

So where may today’s young Neo Romantic seek inspiration if he or she wishes to aim beyond the slap and the zhoosh to summon up solar-powered charisma of Blitz Kid proportions? The answer is in the UK right now (Soho Theatre London this week, The Arches in Glasgow next) and he is an incandescent and witty Californian called Taylor Mac.

Clad in more sequins than a sultan’s harem could shake at you, he gives a full-throttle musical cabaret that is unexpectedly poignant, invigorating and original. You also laugh more than you ever did at Eddie Izzard’s last sidesplitting tour. Mac’s audacious dissection of the essence of theatre, vaudeville and other performing arts evokes Merman and Garland, Wainwright and Brel while asserting his own unique brio. He reinvents pop classics by David Bowie and Tiny Tim (yes, you do remember his hits Tiptoe Through the Tulips and I’ve Never Seen a Straight Banana) by delivering them with an earnest that moistens the tearducts. The evening’s ironic sub-title is The Ziggy Stardust Meets Tiny Tim Songbook, because these are the comparisons reviewers draw about Mac, yet they seldom remark on how he turns Starman and Heroes, those holy invocations of the 80s Bowie fan, into altogether heart-rendingly new songs.

His themes are love and longing and roleplay and tolerance for what society calls a gender-bending misfit who sprang fully formed from the egg, craving the glue that fixes eyelashes. What results is the most stupendous spectacle, charged with insights as mere as how to signal the end of a song, one way being a sustained high note, another to deliver a wide-eyed “Cha-cha-cha!” through smiling teeth, but the coup de grace is a solemn downward arm gesture LIKE SO! For 90 minutes Mac fills the Soho Theatre many times over with a sustained rush of theatre magic. And yes of course he’s on YouTube, but that entirely defeats the point the past 1,000 words have been making.