➤ Schama gives us a taste of the ambassador’s life 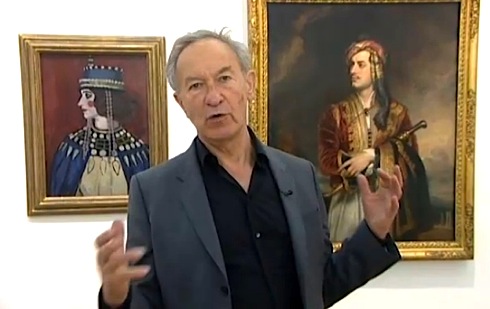 ➢ CLICK PIC TO VIEW BBC NEWS VIDEO of historian Simon Schama introducing his choice of travel paintings at the Whitechapel Gallery, and revealing his own Essex origins which he shares with artist Grayson Perry.

❚ TODAY WE CAN ALL SEE A HOST of paintings seldom available to the British public because they usually hang in our embassies and government buildings around the world. They are owned by the British government and all incoming ministers of state have the pick of this vast and impressive 100-year-old collection from which to decorate their offices. (The Blairs when in Downing Street lined the entrance corridor with lively Scottish colourists and the main public reception room showcased living stars of British art from Allen Jones to David Hockney. The Camerons have chosen endless routine landscapes and city views, several contemporary minimalist images by Susan Collins and David Austin, and among the few human beings, 19th-century prime minister Benjamin Disraeli, twice.)

Travelling Light is a selection made from the Government Art Collection by historian and broadcaster Simon Schama to explore ideas of travel. The show opens today at London’s Whitechapel Gallery. In commenting on his selection he said: “Travelling Light is all about setting off, trying to picture something, never quite catching it but in the process doing something beautiful.”

Highlights of the exhibition include an iconic portrait from 1814 of Romantic poet and intrepid traveller Lord Byron by Thomas Phillips (seen above), brought back specially for the display from the British ambassador’s residence in Athens, Greece. Schama waxes lyrical about the handsome young lord taking his gap year grand tour of Europe as a glamorising prequel to his life of madness and badness. He also loves the urge for adventure seen in Bloomsbury Group painter Vanessa Bell’s portrait of a Byzantine Lady (1912, also above) which is nominally the Byzantine empress Theodora, though Schama notes how it is also a striking self-portrait.