❚ GET AN EYEFUL OF THOSE long-lost cheekbones! Hello! We haven’t seen you since the late 90s. Well, Boy George has been Twittering away for months about his fad diets, his gym routine and doing 100 squats at a time, and this week he unveiled the result — at least from the neck up. And yes, this studio video for Turn 2 Dust does suggest that a few pounds seem to have been shed. 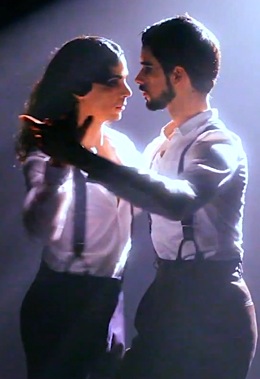 OK the camera is angled from above looking down throughout the three-and-a-half slickly edited minutes. OK he’s shot wearing black and artfully lit in a black void. OK somebody has been paid a fortune to get the maquillage just so. But hey. It’s a start. Welcome to the muscle marys club, George.

This reggaefied version of the highly danceable Turn 2 Dust derives from the track on his MP3 album Ordinary Alien released in March. It’s one of those heartfelt, political George numbers about the outsider “with only truth as my defence” and it pleads for tolerance: “All hatred must turn to dust.” And there’s a break, just for a moment, where you could swear the voice is Bowie’s, oh yes. This very cool video is shot in a no less cool London nightspot, the Lightbox, where George threw his 50th birthday party last June.

The vid is promoting an MP3 package of 11 remixes released this month. To underscore the song’s message, the video features a provocatively camp cast of comic clubbing characters, so it is no surprise that George can scarcely keep a straight face. Cheekbones and all.

+++
❏ Yesterday Boy George was in Macau, the administrative region of China famed for its casinos, to present a deejay session at Club Lotus, preceded by this live videoed press conference. When a journalist asked whether his current musical collaborations might include Lady Gaga, the question seemed to trigger a good-humoured but impassioned rant [scroll forward to the 4-minute mark]. Here’s just a part of it…

“ I’m more interested in working with people in the dance field. I’m talking about house music, not pop. I’m not really involved in pop music — I haven’t been for a long long time. I don’t have anything to do with the modern pop scene. It’s not for me. It’s an alien thing to me. I just don’t get it, don’t feel part of it, don’t understand it. The dance world is more fun — you have more freedom… Pop music is very restricted. Everybody is making the same record, everybody is using same vocal sound, nobody’s singing about anything any more, it’s all crap…

“ That’s a very extreme statement but that’s how I feel. There’s nobody speaking to me in pop music. Everybody just wants to wear the fur coat and drink champagne and talk rubbish. Where’s the David Bowies? Where’s the Boy Georges? Where’s the passion? There isn’t really any. ”

QUIZZED ON THE PRICE OF HIS £499 PHOTOBOOK

❏ Boy George has a chunky 18×12-inch coffee-table picture book titled King of Queens coming out on Dec 12 in a limited edition of 999 signed copies, which includes a 10-inch vinyl anthology of unreleased music, all in a clamshell clothbound case, from Kitchen Sink Publishing, price £499. At the Macau press conference a journalist thought this was very expensive. George replied:

“ It’s 90 pages of photographs, very personal things from my collection, things people have never seen, a beautifully bound collectors’ book. It’s very expensive. But you don’t have to have it. It’s like saying you should put down the price of a Porsche because I want to have it. You know, some things in life, you can’t have. ”