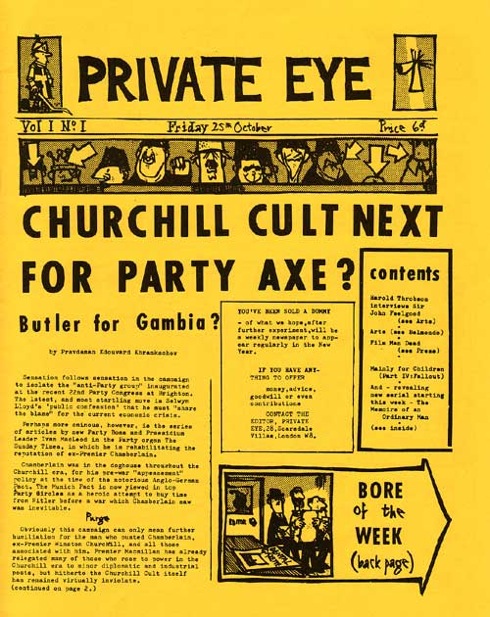 ❚ HOW ONE MAGAZINE has enriched a nation’s vocabulary over 50 years is evidenced by the enormous page at Wikipedia, detailing euphemisms for sex (“Ugandan discussions”) and drunkenness (“tired and emotional”), and the eternal cast of daft characters from public life, as headlined above.

October 25, 1961, saw the first issue of Private Eye as a silly-jokes threat to the ancient humourous periodical, Punch. The Eye was quickly given a worthy role by the nation’s thirst for incisive satirical critiquing of all aspects of the British Way of Life, the irony being that today the Eye itself has become an institutional beacon in the democratic process. As editor for the past 25 years, Ian Hislop’s best boast is that he is the most sued man in Britain, libel writs being substantially provoked by the rear-end pages of sound investigative journalism. Not a bad metamorphosis. Is it then churlish to mention that what some of us really, really miss are the hilarious sketches once enacted on 7-inch flexi-discs attached to the cover and given away with the Christmas issues? [See below] 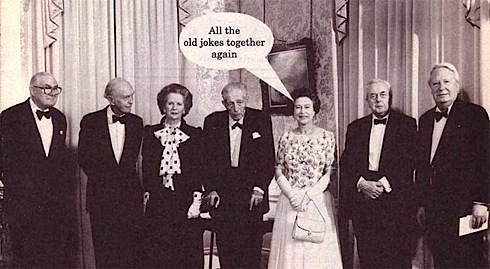 ❏ Back in the 1960s the then new technology of offset litho encouraged cut-and-paste techniques such as the DIY speech balloon photograph (one Queen and a bevy of prime ministers, above). This didn’t stop the Eye from becoming a prominent outlet for the nation’s leading cartoonists (the Thompson effort below appears in the V&A display). 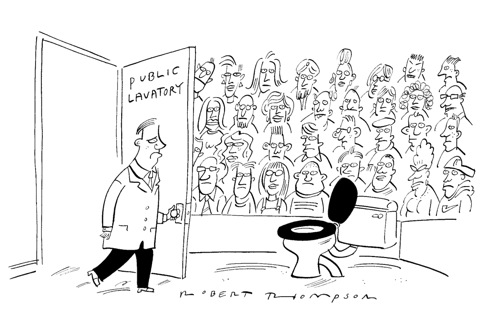 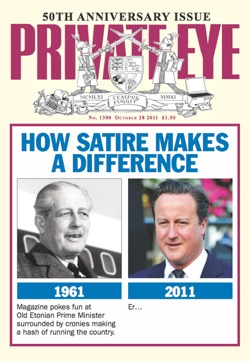 ➢ The Eye celebrates its 50th anniversary with issue No 1300 and at its website a page of unfunny audio recordings that simply don’t come close to the efforts 40 years ago of Peter Cook, Willie Rushton & Co.

➢ The full archive of Private Eye recordings made by Peter Cook, Dudley Moore, Barry Humphries, John Wells, John Bird, Barry Fantoni, Richard Ingrams and Spike Milligan – plus rare photos, video clips and historical notes – can be found at privateeyerecords.com. The whole catalogue of Golden Satiricals is due for release on CD in January 2012.

➢ Whistleblowers and those with a social conscience can download past Eye investigations into subjects such as NHS whistleblowers; How Britain’s poverty relief fund abandoned the poor; full background to the ACTIS-CDC sell-off; How Blair’s government blew £12.4bn on useless IT for the NHS; deaths of four young recruits at the Deepcut army barracks, etc.