2015 ➤ Seven’s easy stages: from jelly parties to saviour of the rock scene 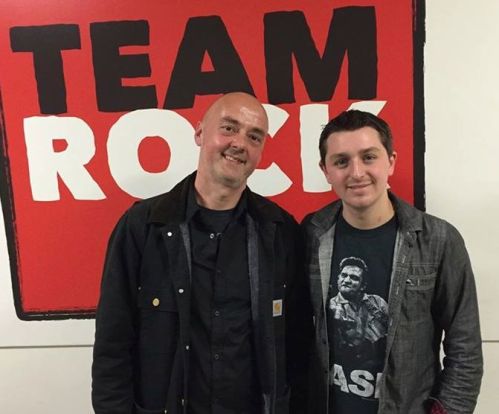 Seven Webster and Pete Bailey: Face to face interview about a life in music

❚ STRICTLY SPEAKING we don’t allow “rockists” onto this blog, since our idea of 80s yoof culture was defined by the dance music and fashion-forward styles emanating from UK clubland. And what 80s pure pop did was to banish 80s rock from the singles charts. But Shapers of the 80s is very happy to make one big exception for probably the nicest guy on the entire UK music scene even though he does all his business down at the denim-clad, can’t-dance, beer-belly end of the music spectrum. His parents with the surname Webster gave him the unforgettable first name of Seven, and in the 30 years since he spouted one hilarious soundbite after another when we met in a posey little Numanoid London club, he has learned the ropes as musician and manager and built his own influential company into a thriving business.

Tomorrow, his outfit 7pm Management launches a new annual rock music conference at Rich Mix Cultural Foundation in Shoreditch. RockComm London describes itself as “the first UK-based international rock music conference aimed at bringing together all sectors of the community for positive discussion aimed at stimulating business and growth”. It hopes to unite everyone from labels, publishers, managers, distributors, agents, promoters, manufacturers, digital aggregators, the lot.

Seven says: “With so many great rock music based companies from across the world wanting to be involved, we’ve extended the event to give everyone time to network, which is the conference’s primary objective.”

“ There are people actively signing rock music
at moment: it’s a very buoyant time for rock ”

RockComm launches with a full day of networking which will showcase some of rock’s tastiest new bands. “The emphasis will be on quality over quantity.” The conference itself occupies Tuesday 9 June, as an appetiser for the UK’s biggest rock music event, Download Festival, and leading up to both the Kerrang and Golden Gods award ceremonies.

It is more than ironic that Seven is attempting to reconcile the many differences that define the music industry within a week of one of the most influential managers from the 1960s, Simon Napier-Bell (Yardbirds, Bolan, George Michael), partying in Soho to promote the paperback edition of his latest book, Ta-Ra-Ra-Boom-De-Ay. In this painstaking slice of history through the past 200 years of popular music he decides that nothing has changed in a business based on “greed, corruption, self-interest and fun”. Today recorded music remains in tricky balance between art and marketing where traditional record companies are squeezing a dying revenue stream and the US government still prosecutes them for payola offences running into millions of dollars.

Seven is one of a seemingly small band of brothers who is determined to assert his creative ideals. He draws on a lifelong love of music – “it’s my heart and soul” – and believes rock music is in a very buoyant state today, with people actively signing rock acts and wielding what he believes is “a cumulative fist”. His own reputation is as an international rock festival booker (Hard Rock Hell and Hammerfest) and worldwide artist manager of Skindred. His partner in 7pm and in RockComm is Steve Wolfe, a former Universal Records director of A&R.

As a taster of his ideology, Seven gave this hands-up interview to Pete Bailey at TeamRock national DAB and online radio. He talks about being the manager of Skindred, The Qemists and Dido, his brother-in-Law Mick Wayne (RIP) and former guitarist with David Bowie and the Pink Fairies, new bands and brands making waves and monetising their social media…

+++
During this half-hour stroll through his life-story, Seven reminds us of when he played guitar live at the Lyceum during the Batcave era in a goth band called Geschlechts-Akt (German for Sex Act). “We weren’t great,” he says. Make up your own mind here by sampling their track Libido Twist from the Foreplay 12-incher (Criminal Damage Records, 1984) at YouTube.

Seven’s next band One actually signed to Chrysalis for £65k. Seven took his turn, as you did in the 80s, fronting a clubnight called Pigeon-Toed Orange Peel, then edited a magazine, as you did in the 80s, called The Buzz to help launch other bands, as you did in the 80s, which led into management and promoting new acts at the Marquee. So not too much standing still, then. Seven’s advice for the ambitious newcomer? “Don’t emulate, innovate. Take your time and put a good team around you.”

Just to make him squirm a bit, here’s the snap of Seven propping up a fruit machine the night we met in 1983 at a post-Romantic clubnight in Mayfair called the Padded Cell. Though it was fronted by a couple of wannabe 70s Numanoids, he quipped about the exceedingly time-warped crowd that night: “So many people here have stepped straight out of their nappies into bondage gear.” Not him, of course. So what was he doing among this bunch of late arrivals on the synth scene? “I just hate staying in,” he said. “I’ll go to ice-cream and jelly parties, anything.” Which was enough to get him into my nightlife review in The Face. The rest is history.

A quiet master of the telling quip: Seven Webster at the Padded Cell in 1983. Photograph by Shapersofthe80s

➢ Previously at Shapers of the 80s:
Seven heads the talking heads in that 1983 review for The Face