➤ “It will happen again” says London teenager who predicted riots 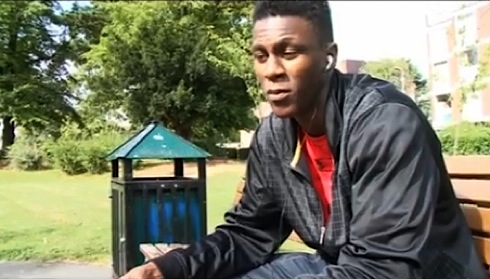 Chavez Campbell today: “I’m an outcast because everyone is doing crime and I’m trying to stay on the straight and narrow.” (Guardian video)

➢ View today’s video in which Chavez tours his neighbourhood: “I did predict a riot. The government should have seen it coming”

❚ A WEEK BEFORE LONDON EXPLODED with the most shocking violence in memory, 18-year-old Chavez Campbell predicted the reaction to cuts in local youth services. “There’ll be riots,” he said in a video interview [below] for Guardian Online six days before they actually occurred. He and other young Londoners were describing the bleakness of their daily lives.

Campbell, who has recently left college and is struggling to find a job, does not condone rioting but does represent a voice that has been rarely heard in the maelstrom of recent days. He saw the riots explode, but went home to stay safe. Today Guardian Online publishes a second video interview in which he expresses further concern: “I don’t think it’s over. Because everyone came together and created this massive war zone, I think it will happen again.”

➢ Read today’s report on Chavez Campbell’s views at The Guardian: Riots not condoned by Campbell but says youths with no jobs, no money and no future were ripe for causing mayhem

❏ The police are asking for people to shop those who destroyed and looted stores across the country [above]… Trouble is, as witnesses point out, “there’s no worse crime than grassing” … and “They’ve given out sentences of four months and six months, it’s farcical. In four weeks’ time those people will be out on tag anyway. There’s no point sending them to prison.”
➢ BBC News video August 12: Suspects appear in court