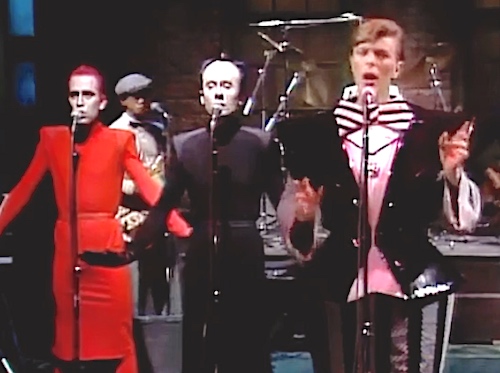 ❚ HERE’S A RARE CHANCE TO VIEW one of the most inspired renderings of The Man Who Sold the World: David Bowie during a performance on Saturday Night Live on 15 December 1979. As backing singers we see the bizarre German punk Klaus Nomi at centre and wearing red at left is American performance artist, Joey Arias, who became a regular act at Club 57 in New York’s East Village. Anyone who visited the 2013–2015 touring exhibition, Bowie Is, from London’s V&A museum, will have seen Bowie’s huge tubular costume at first hand…

Luckily, this 8-minute clip also includes brilliant versions of TVC 15 with Bowie in a skirt and heels, plus Boys Keep Swinging where he sports a nude puppet costume with bizarre extremities. Nomi introduces us to his poodle who appears to have swallowed a TV set in this gifted trio of performances.

The Man Who Sold the World – title track of Bowie’s third studio album – was written in 1970 but released on the B-side of a single hence missed the charts in its own right. It did reach No 3 after Lulu covered the track in 1974 and other covers followed, including one by Midge Ure. Critically the song is widely regarded as one of Bowie’s essential best and only in his last couple of decades did he start rendering it in live performances in utterly different and often haunting ways. Nevertheless, the SNL video from 1979 is powered by a cascade of supremely confident operatic flourishes, “Ohhhh-oh-ohhhh, ohhhhhhh-oh!” 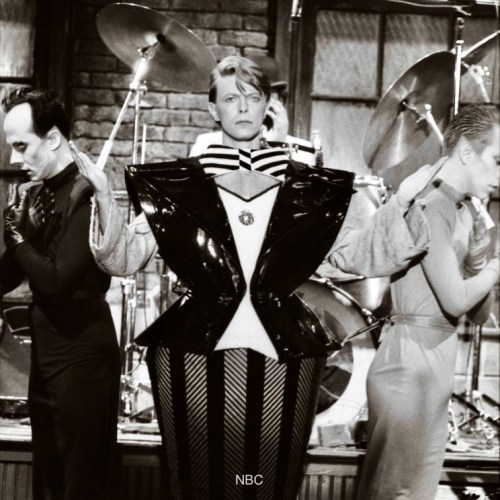 SNL December 1979: In his outsized costume, Bowie sings The Man Who Sold The World, flanked by Klaus Nomi and Joey Arias 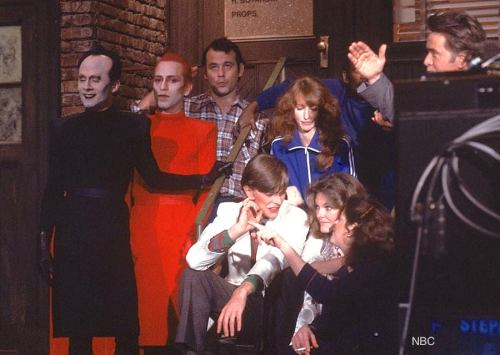