➤ The day Harry Evans answered his interview question for me 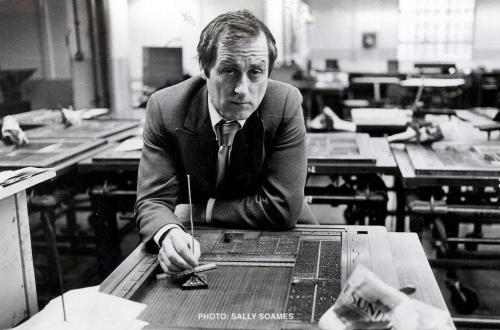 Harry Evans “on the stone”: pictured by Sally Soames in the days of hot metal production at The Sunday Times

❚ SIR HAROLD EVANS, who has died aged 92 and known to all as Harry, was not only a legendary crusader for investigative journalism but, along with Ben Bradlee of the Washington Post, one of the two greatest newspaper editors of modern times. Crucially he embodied the editor as a lightning rod through which a savvy team can channel their expertise.

I have personal reasons to be grateful to him after seeking a job interview when badly needing a change of direction in 1978. At his office at The Sunday Times in Gray’s Inn Road Harry was armed with a checklist of newspaper know-how on his clipboard which I seemed to be ticking copiously as an all-rounder used to multi-tasking on a variety of projects in print. (Most people in this business tended to do one thing only: Columnist, or Reporter, or Commissioning editor, or Designer etc.) So eventually he asked: “What exactly is it that you do?” – “A bit of everything,” said I. – “Ah,” he replied, “you do what I do.” – “Do I?” (deeply flattered). – “Yes, you’ve got the impresario skills – able to execute every stage from bright idea through to printed page.” Well that put a spring in my step and from there on, my career flew!

Visual flair was an ingredient as important to Harry as the words themselves – wisdom he spelt out in five definitive manuals published in the 1970s under the series title of Editing and Design. Here he shared with the rest of Fleet Street how his dramatic impresario skills were key to defining the rigour and astuteness which quality journalism demanded in each of its presentational crafts: Newsman’s English, Newspaper Text, News Headlines, Pictures on a Page, and Newspaper Design.

Easily the best account of journalism’s cut-and-thrust is his 1983 book Good Times Bad Times which nails the pitiless manners and mores of British newspaper execs and the proprietors they serve. Written in anger after his falling-out with Rupert Murdoch, it also reads like a racy thriller.

➢ Columnist Hunter Davies on “the best journalist
I ever came across”

➢ The master craftsman – obituary in the Financial Times
by Lionel Barber, its editor for 15 years

➢ Previously at Shapers of the 80s:
2012, Sir Harold’s memories of Fleet Street:
cut and thrust, or be cut dead