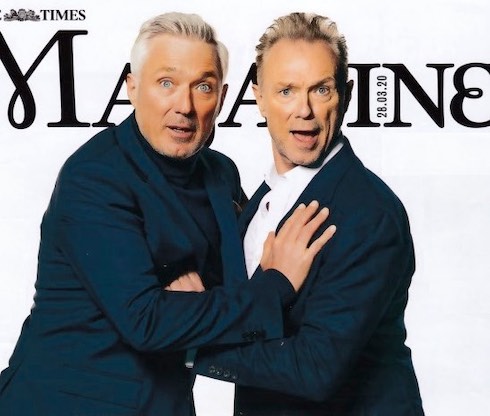 Is it a mockumentary? Spandau brothers reveal all to a Times Magazine journalist. (Photo: Mark Harrison)

◼ WE’VE SEEN A COUPLE OF GOSSIP ITEMS about the Kemp Brothers from Eighties supergroup Spandau Ballet making an oddball TV documentary, but now comes a cover story on a colour supplement no less, to spill more beans about it. Polly Vernon makes a neat job of interviewing the Angel bros, now aged 58 and 60, in Saturday’s Times Magazine, teasing out their lifelong sibling rivalries, keeping them on their toes as much as they return the challenge, songwriter Gary “less inclined toward affability”, she reports, and bass-player Martin “as gentle and affable as he is handsome”. Oh, by the way, did Polly mention he was handsome…? Here are some vital facts about the film satirically titled The Kemps: All True in an extract from her article…

“ POLLY VERNON WRITES: We have met so that Gary and Martin might promote the 60-minute film made for the BBC in which they play themselves – except, not really – going about their everyday lives (except, not at all). It’s a confusing proposition; part scripted, part improv, part biopic, part nonsense fabrication. Half-truths about the Kemps’ actual characters, histories, relationships and physical attributes meld with overblown fantasies about multiple kidneys and long-lost half-brothers called Ross Kemp.

By definition, All True has none of the honesty of 2018’s Bros documentary, that heart-breaking, cringe-inducing, nostalgia-triggering film that documented Matt and Luke Goss’s real attempts to navigate their fraught sibling relationship, on which I’d assumed All True was based. (Gary is keen I know it definitely isn’t – All True was written before Bros: After the Screaming Stops was released – and he, Gary, hasn’t even seen that film. Martin has, mind. “It’s brilliant. That’s who they are, you know? I know them really well, and that’s who they are.”)

Furthermore, I can’t even really tell to which genre All True belongs. What are we calling it, I ask. A mockumentary?
“Hmmmm,” says Gary.
“Yes. That’s what it is,” says Martin, who is rapidly proving as gentle and affable as he is handsome.
“Oh, I’m not sure… Is it?” asks Gary, more interested in being perfectly, completely understood. “I don’t know. What else could you call a mockumentary?”
Uh, a comedy?
“Yeah, a comedy,” says Gary.
(“A comedy. Yeah!” says Martin.)
To be fair, despite it defying reason and categorisation, All True is very funny. Not all of it lands, nor is it precisely as Gary Kemp says he intended: “Like Larry David’s Curb Your Enthusiasm. Like the Steve Coogan-Rob Brydon thing [The Trip], you know.”

Some of it even ventures into comic genius territory… All True was conceived by director, writer and comedian Rhys Thomas (of Star Stories, The Fast Show and Nathan Barley). Thomas had worked with Martin Kemp, so when he approached Martin and Gary with a script for a show depicting a preposterous version of the brothers that, at the same time, wasn’t entirely removed from the truth, they said they’d do it. It seemed fun, they tell me – an opportunity to play with the world’s perceptions of them.
“French and Saunders do Gary and Martin Kemp,” says Martin.
“Our traits, but highlighted,” says Gary.
“Us, but on steroids!” says Martin… ” / Continued at Times Online 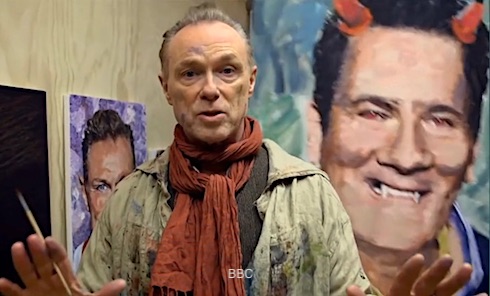