➤ Bowie’s taste in art: respectable, with bargains to be had at Sotheby’s auction 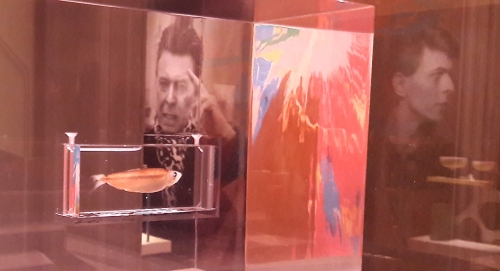 Damien Hirst, Untitled Fish For David, 1995, est £40,000–60,000 – From the Young British Artist who preserved an adult tiger shark in a giant tank, this gift from Damien Hirst to David Bowie contains a tiny 2-inch fish in formaldehyde, as “a profound inquiry into human existence”. Here displayed at Sotheby’s London, reflecting and refracting other art in the saleroom. (Photography © Shapersofthe80s)

◼ BEFORE THE AUCTION OF DAVID BOWIE’S ART at Sotheby’s, treat yourself to the free exhibition of 350 works owned by the pop star who died this year. His eclectic taste embraces pop art, Damien Hirst, German expressionism, Tintoretto, Surrealism, Contemporary African, a chess set by Man Ray, a couple of Duchamps, and much primary coloured contemporary furniture from Italy’s Memphis Group (which occupies much of Part 3 of the sale, dedicated to Design). The auction represents about half of Bowie’s entire art collection which he admitted to buying obsessively over 30 years. The evidence is that he had a sharp eye.

What’s surprising is the number of eminently collectable smaller items being offered at affordable prices which are bound to attract first-timers to next week’s three sales – all offering online bidding. Painted tabletop sculptures in aluminium by Ivor Abrahams are priced at a few hundred pounds, his bronze sculptures at perhaps £1,500. Ceramic plates decorated by Picasso and Cocteau are priced at just over a thousand and there’s even Sir Stanley Spencer’s artist’s palette for £2,000. Having toured the Bowie exhibition highlights to New York, Los Angeles and Hong Kong, Sotheby’s is geared up for long-distance bidding.

Click any pic below to enlarge and launch slideshow 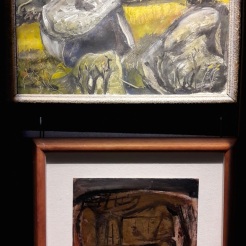 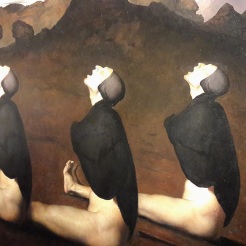 Ettore Sottsass, Enorme telephone, 1986, moulded plastic, est £200–300. The final lot in Friday’s Design sale
The full set now on display makes an engaging and mischievous show, crammed with paintings and sculpture that may not be masterpieces, as the BBC’s arts editor Will Gompertz has noted [video below], but by and large represent good examples from highly regarded artists. In light of which, many of Sotheby’s estimated starting prices seem temptingly low.

Frances Christie, head of its Modern & Post-War British Art Department, explained why they have to apply prevailing market prices: “It’s hard to quantify what the ‘Bowie effect’ might be. We have to take into account market precedents, so for example, the world record for Peter Lanyon’s work is £370k. The Lanyon painting Trevalgan in the sale is not as well known so we have priced it at about £250k, which I think is fair. The range of our estimates can only be a guide.”

“David was like a child, childish and childlike
when he came to see me in the studio and we made
a giant spin painting together” – Damien Hirst

Frances is pleased that as a collector Bowie favoured 20th-century British modernists and, with some prices starting in the low thousands, this sale might help spread the word abroad for names such as Gill, Wadsworth, Bomberg, Minton, Nevinson, Wyndham Lewis, Hitchens, Tunnard, Armitage, Chadwick, Kossoff, not forgetting Moore, Sutherland, Auerbach and Scott.

Gompertz remarked: “Bowie’s taste appears to have been fairly conservative but very specific. He liked the art that came from the same place as him: mid-20th-century UK. It is art that you could argue shared his philosophy, a philosophy that went on to shape his aesthetic. It is art that questioned, that was preoccupied with the surface, that had many sides; that never quite settled. Art that performed.”

Just totting up the top estimates for the 47 Modern and Contemporary works in Part 1 of Sotheby’s sale – which stars Francis Picabia, Damien Hirst, Patrick Caulfield and Jean-Michel Basquiat – could yield £11.6million. How the “Bowie premium” might inflate these auctioneer’s estimated prices is what promises to keep us on our toes throughout Thursday and Friday.

➢ The Bowie/Collector exhibition is free, unticketed and open to all at Sotheby’s, Bond Street, until noon on Thursday 10 Nov, 2016

➢ Potential buyers must register in advance for the three auctions. All offer ticketed admission to the saleroom, online bidding (BIDnow), absentee bidding or telephone bidding. Incidentally, the web catalogue contains much extra information about selected works, as well as condition reports for all.

➢ On video – Working with Bowie: an insight into an incredible mind, by his curators