The performance: Jamie Lovatt gives his all on The Voice, March 8 © BBC

❚ THAT’S THE WAY TALENT CONTESTS CRUMBLE. One minute you’re flavour of the week. The next, you’re out. That’s the way Saturday primetime TV crumbles too. The show is called The Voice. It’s not called The Star. So although glam-rocker Jamie Lovatt radiated tons more charisma than the awkward bloke from the pub, Chris Royal, who was wearing his Auntie Mabel’s pinafore under his jacket, the bloke won this week’s vocalists face-off because apparently, according to coach Ricky Wilson, you “can’t learn the kind of emotion he can portray in a song”. (Even while wearing a pinafore and a twat-Kevin baseball cap back to front. In 2014! Per-lease!)

The pair were billed as Emotion vs Power and powerhouse Jamie was sent packing back to his band Romance, whose bookings have suddenly sky-rocketed thanks to his TV appearances, so that can’t be bad. Pop goddess Kylie did bid him goodbye saying: “Everybody’s going to fall in love with you. You already have it all. Run with it.” Fact is, Jamie has all the attitude to be the next Adam Lambert and a better rock voice than the falsetto bloke from the pub, so long as he chooses better rock songs by real rock writers than the Adele number he nobly had to get his vocal cords round on Saturday night.

The fan: Kylie the coach who could have recruited Jamie, but didn’t

The coach Ricky Wilson: the man who drowns kittens parts company with Jamie 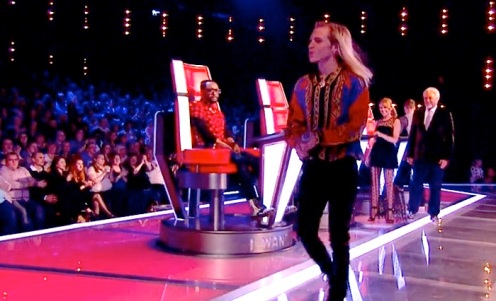 The exit: Will.i.am, Kylie and Sir Tom Jones are fascinated to the last

After Ricky the coach had passed verdict on which of his two protégés was staying in the contest, he totally bottled out of making eye contact with Jamie in their kissy-huggy moment of parting, and mumbled one of those reality-show platitudes: “Life is made of big decisions. You made a really big decision. I had to make one too.” He did look choked, to be fair for one second, but he did also look like the man who drowns kittens in a sack, and turned away utterly shame-faced. The best bit was Jamie’s flouncy exit during which the other three judges beamed benignly behind him and couldn’t take their eyes off his defiant strut.