1959 ➤ When beans defined bohos and cappuccino tasted of coffee 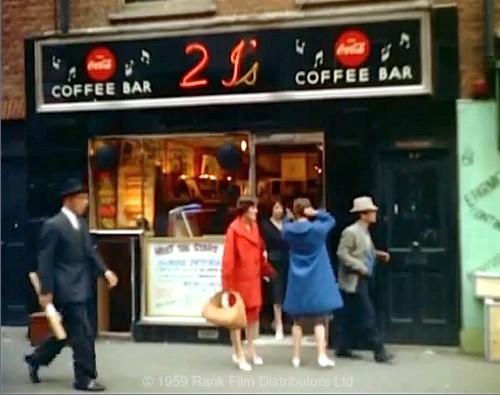 The Look at Life tour starts at the 2I’s in Old Compton Street: click to run video in a new window

➢ Tour the bohemian coffee bars of London on film

❚ FROM SMALL COFFEE BEANS a mighty fad exploded. The documentary film clip, above, immaculately preserved in rich Eastmancolor, takes us on a tour of Soho in 1959. The distinctly arch voice-over tells us: “ The coffee bar boom in Britain began in 1952 when the first espresso machine arrived from Italy and set up in London’s Soho. They reckoned that a cup costing tuppence to make could be sold for ninepence to 1s 6d [about £3 in today’s money], according to the trimmings. But for every three coffee bars that opened up, two closed down… ” / Continued at YouTube 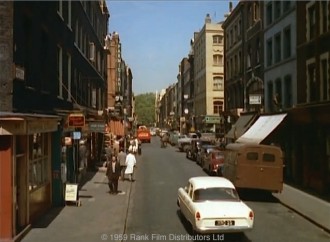 Intellectuals are drawn to Le Macabre coffee bar in Soho 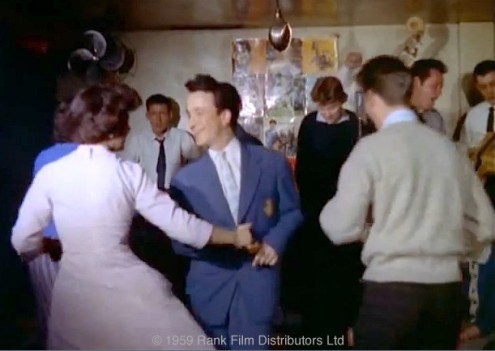 Home of rock’n’roll: Jive cats at the 2I’s in Old Compton Street
With the arrival of ITV in the mid-50s, the UK’s two television channels competed to bring the day’s news into living rooms. In Britain’s cinemas the Rank Organisation responded in 1959 with the weekly magazine Look at Life, a series of light-hearted short films to precede the main feature on their Odeon and Gaumont circuit. This episode, titled Coffee Bar, takes us inside a few of Soho’s many haunts that took care to attract their own social segment: at the 2I’s in the basement of 59 Old Compton Street, live rock groups ensured a young clientele of jive cats, for example, while artists hung out at The French, intellectuals at the Macabre, politicos at Le Partisan, while writers and actors favoured Legrain.

Fifty years on, you’d be hard-pressed to distinguish one Soho bar’s customers from another’s – rather like the vile burnt cinders they all sell in the name of “coffee”. One sad consequence is to see the genuinely delicious stuff being edged off our supermarket shelves, presumably driven out by tastebuds destroyed in the high-street branded coffee shops.