What larks! Festive fun and games and British ways to make merry

Bobbin’ about to the Fiddle — a Familly Rehersal of Quadrille Dancing, by Charles Williams, May 1817: published by Thos. Tegg No 111 Cheapside

❚ UNLIKE 21st-CENTURY DANCING, when the quadrille was introduced at Almack’s Assembly Rooms in 1815, its steps were notoriously difficult to perform correctly. This luxurious salon in King Street, St James’s — where the ballroom was partitioned off by crimson ropes — was governed by a committee of despotic lady patronesses who ruled over a “magic list” of those who may or may not be admitted to their weekly balls. Studio 54 had nothing on the power of these women: they effectively decided who belonged to “society”… “All on that magic list depends/ Fame, fortune, fashion, lovers, friends…/ Banished thence on Wednesday night/ By Jove you can do nothing right.”

Yet even at Almack’s after Lady Jersey, wife of the 5th earl, brought the quadrille over from Paris as an energetic French precursor to traditional square dancing, wallflowers would sit sniggering as they watched the beau monde’s finest stumbling through the intricacies of its steps and twirls and changes of partner. The quadrille nevertheless soon became all the rage, so required determined practice.

Breeding counted for more than money at Almack’s and the prime role of the magic list was to exclude “cits”, precisely the kind of nouveau riche city-dwellers depicted above by caricaturist Charles Williams, in May 1817. This bourgeois family are preparing for their seaside vacation in Margate by practising their dancesteps at home.

The father is saying to the French dancing master: “I say, Mounseer Caper! Don’t I come it prime? Ecod, I shall cut a Figor!!” [ie, figure], and one of the daughters says “Law, Pa, that’s just as when you was drilling for the Whitechaple Volunteers — only look how Ma and I & sister Clementina does it!!” while the dancing master says “Vere vell, Sar, ver vell, you vil danse a merveille vere soon!” Nobody was spared from the satirist’s pen. 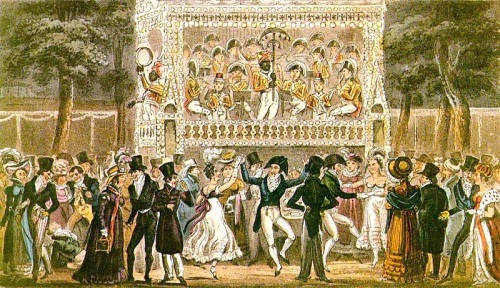 Tom, Jerry, and Logic Making the Most of an Evening in Vauxhall: by Robert and George Cruikshank, from Pierce Egan’s Life in London (1821)

❚ FOR 200 YEARS THE VAUXHALL GARDENS were the most notorious and important of London’s many pleasure gardens, immortalised in Fielding’s novel Tom Jones by the description “where people come to undo others, and others come to be undone”. Vauxhall lay on the south bank of the Thames, up-river in a rural setting beyond London’s city limits, where the gardens opened before the Restoration of 1660 and closed finally with a fireworks display in 1859. Today all that remains is a small park bearing the name of the original Spring Gardens, while nearby streets do likewise for the enterprising proprietor, Jonathan Tyers, who from 1728 invested in enhancing the grounds so that in their heyday he could charge a guinea admission. (That would be £173 or $267 in today’s money!) He commissioned Roubiliac to make the great statue of the composer Handel for the gardens and added an orchestra pavilion, fountains and temples. Frederick Prince of Wales was his most prestigious patron.

Over several acres Tyers introduced formal plantings which offered attractive paved walks lit by thousands of glass lanterns in the arbours by night, and shrubberies for the making of mischief. Fireworks, hot-air balloon rides and circus performers provided entertainment along with music such as Handel’s from the bandstand.

Elegant painted booths afforded privacy while dining and the ornate Rotunda and other rococo pavilions became famous London attractions. An audience of 12,000 attended Handel’s Fireworks music at Vauxhall which brought together “persons of all ranks and conditions”. The 19th-century history of London Old and New observes “the English assert that such entertainments as these can never subsist in France, on account of the levity of the people”.

By 1712 Sir Roger de Coverley is supposed to have said that he’d have been a better customer to the gardens “if there were more Nightingales and fewer Strumpets.” So it was inevitable a century later that the rakish Tom and Jerry would pay their guinea for admission to Vauxhall. Their rip-roaring “sprees through the Metropolis” would one day give their names to Hollywood cinema’s cartoon cat and mouse, and in their own day they were no less famous.

“Jerry Hawthorn Esq, and his elegant friend, Corinthian Tom, accompanied by Bob Logic, the Oxonian” were young London clubmen created in 1821 by the sports-writer Pierce Egan in his monthly journal, Life in London, which became a runaway success. It was illustrated by the leading satirist of urban life George Cruikshank and its trio of hellraisers became contemporary pinups much copied by other engravers.

The topmost Cruikshank print is not among the best to record the showy splendour of Vauxhall Gardens but it is one of the few to locate Tom and Jerry, their journalist creator and the graphic satirist at London’s hedonist destination — five Regency legends in one image.

❚ BEFORE TV RULED OUR LIVES, playing parlour games was how families amused themselves at the annual Christmastide gathering and Twelfth Night was the traditional day for games, merriment and feasting. The punch called wassail was the drink of choice, and in the Regency era a grand masqued ball often heralded an end to the solemnity of religious observance. Twelfth Night concludes the 12 days of Christmas and precedes the feast of the Epiphany on January 6 (though these dates vary under different sects of Christianity). It was not until the Victorians, influenced by the monarch’s Germanic roots, that we shifted celebrations to Christmas Day itself, which had previously been only a religious holiday.

Cruikshank’s hand-coloured etching from 1807 (above) shows three couples playing the traditional Twelfth Night game of acting out the character depicted on the tickets they have drawn from a bag held by a fat squire seated at left who sings the praises of “good old English customs”. Each ticket is inscribed with a portrait and description. Only two players are happy with their choice: on the left The Queen of Love has been drawn by a self-satisfied lady with a long nose, and on the right The Lovely Hostess by a jolly lady who smiles. The others have drawn unflattering or sarcastic tickets and regard them with expressions of dismay: the dandy in green is affronted by being perceived as a “man of fashion” while the fat woman in yellow has drawn “Miss Higginbottom” and remarks “Put in the bag on purpos to affront me I dare say”. We see a decorated Twelfth Night cake and candle on the side table.

Isaac Cruikshank is one of the four celebrated British illustrators (along with his son George, Thomas Rowlandson and James Gillray) who established satirical caricature as a powerful medium of social comment at the dawn of the 19th century. The Private Eyes of yesteryear.

❚ PLUM PUDDING IS THE ESSENTIAL CONCLUSION to a traditional Christmas feast. It is made not from plums but dried fruit and for good luck every member of the family should have a hand in stirring the mix before it is steamed or boiled. Since medieval times, the pud has become as symbolic of Britishness as Britannia and John Bull. This political cartoon was drawn by James Gillray in 1805 as a response to one of the most traumatic periods in Britain’s history.

It is titled The Plumb-pudding in Danger and shows William Pitt, Britain’s youngest prime minister, wearing a regimental uniform and sharing a table with the French emperor, Napoleon. A plum pudding represents the world as a globe and each leader is carving himself a slice. Pitt takes possession of the seas with a slice considerably larger than Napoleon’s, who carves off Europe where the French are the dominant military power. The previous year war had been renewed between Britain and the First French Empire that had followed the Revolution of 1789 and a period of continual warfare. With Napoleon intent on invading Britain, Gillray produced many prints in which he imagined the horrors of a successful invasion. By 1805 a British naval blockade on France was successfully frustrating French sea-trade and naval retaliation, so that January the emperor sought a reconciliation with England. Presciently this cartoon was published only months before the decisive British naval victory in the Battle of Trafalgar.

❚ THESE YOUNG BUCKS ARE FLOUTING THE RULES of ice-skating in the Regency period. Among outdoors activities in Georgian England, skating was so hugely popular that the poet Samuel Taylor Coleridge waxed exceeding florid in a prose essay about the pastime for The Friend magazine, where he noted “the melancholy undulating sound from the skate”. Inevitably society proposed “a proper attitude for genteel rolling”, the posture illustrated most famously in Sir Henry Raeburn’s painting of the Reverend Robert Walker, who as a member of the Edinburgh Skating Society is seen serenely gliding with arms crossed over his chest. Evidently, the two January bucks above were only too keen to flaunt their own style to catch the attention of their female admirers on the riverbank.