1980 ➤ Can birthday-boy George tell his Boudica from his Britannia? 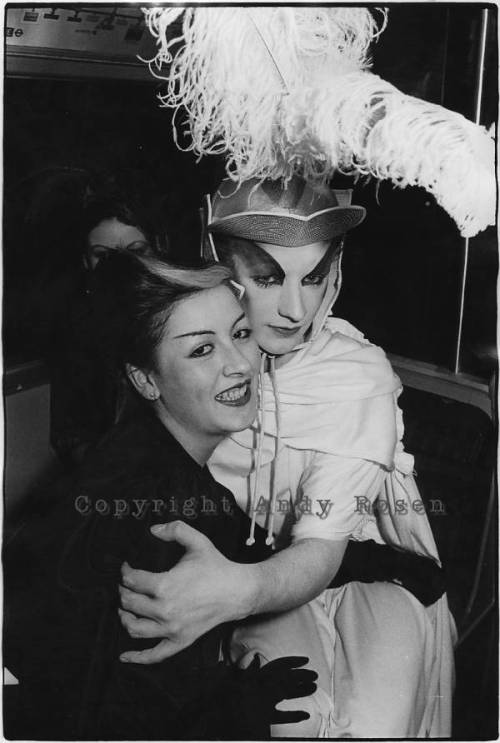 George-before-the-Boy: posing as Queen Boadicea with Jayne Chilkes at Steve Strange’s 1980 party on the Circle Line. Photographed © by Andy Rosen

❚ WHO’S A NATIONAL ICON THEN? On this day 30 years ago not only was it George O’Dowd’s birthday, as it would be every year. But in 1980, at the age of 19, he was prancing around the Mall dressed so he claimed, as Boadicea, Queen of an ancient tribe of Britons, wielding union-jack shield and trident. While our current Queen ERII processed down the road to Trooping the Colour, this was his “quest for publicity” as the Blitz Kids competed at getting their pictures in smart magazines. He was livid the next day to find not one mention of him in the tabloids to boost his own growing scrapbook of cuttings.

The look had been unveiled a couple of weeks earlier on the 21st birthday of his pal (ha!) Steve Strange, host at the Blitz, who had decided to throw a party on the Circle Line. About 50 ornamental clubbers piled into the bar on the platform at Sloane Square station aiming to pub-crawl their way by train to the other subterranean bars at Paddington, Baker Street and stations beyond (all now long gone) while armed with ghettoblasters, booze and fags. Prevailing fashion priorities prompted an unholy alliance between ecclesiastical drapery and Norton biker jackets.

Quiffs were being worn very high that summer – Strange’s rose a foot above his head, while below he had opted for a cowled satin surplice that might have appealed to a decadent monk. True to their competitive spirit, George had gone for an all-out pagan toga topped with a warrior’s silver helmet and monumental feathered plume (a gifted work of metallurgy in silver lamé by Stephen Jones). The big picture shows George modelling the outfit onboard the train in the arms of Jayne Chilkes (the elder of the two sisters, who claimed to receive ghostly messages from Oscar Wilde and then scribbled them all over his books). 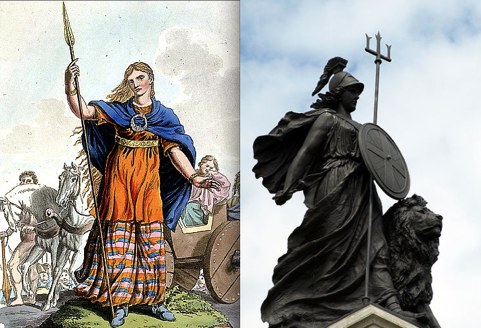 Celtic battleaxe Boudica or Roman goddess Britannia: which would you rather be?

Actually, the origins of the Boadicea who was turning heads in 1980 lay in a madcap jaunt to the south of France (ultimately abandoned) with his squat-mate Marilyn who’d arranged a cabaret booking for them – Marilyn playing, well, Marilyn, and George playing some alien rock star as well as this toga’d character Boadicea. Well, the outfits had proved “too amazing to give back”, so George had walked off with them. In 30 years, I don’t think anybody has had the nerve to tell him he was really dressed as Britannia, the Roman goddess who became an emblem of the British Empire which at its height ruled a third of the world’s population. With her Corinthian helmet and the sea-god Poseidon’s three-pronged trident, Britannia has been pictured on our coins since Emperor Hadrian’s day.

Boadicea (or Boudica as smart people call her these days) was the one who led a barbaric revolt against the Roman occupation under Suetonius in about AD60, burnt London to the ground and today sits on Westminster Bridge still shaking her single-headed spear at Parliament. Did you ever see Boudica toting a trident? I don’t think so. Or shaded by a Grecian visor against dazzling British sunshine? I don’t think so. Nasty scythes projecting from her chariot wheels, yes. Her daunting right breast exposed, yes. Woad from head to toe, yes. So. If we’re in need of icons, let’s get them right.

Talking of which . . . How does an icon live? George was last month greeted as a “chalk-faced convicted thug” by the Asia News Nework on his visit to strife-torn Bangkok. Today he’s en route to Cape Town for a gig tomorrow, returning for the Glastonbury festival diary date on the 24th. A 16-track album Extraordinary Alien is promised for, er, “very soon”. And to celebrate his 49th birthday, his Twitter account has been turned off. Scythed wheels of steel are a’spinning. 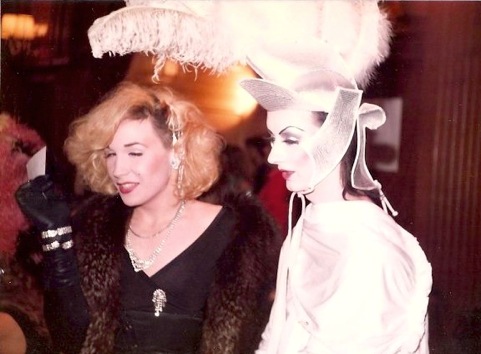 Another day, another premiere: Marilyn and George as Boadicea on the town in 1980. Pictured © by Robert Gordon

One response to “1980 ➤ Can birthday-boy George tell his Boudica from his Britannia?”