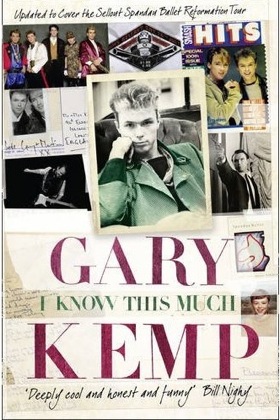 ❚ ONE LONDONER’S LIFE newly topped up in paperback today. . . Spandau Ballet songwriter Gary Kemp surprised many when last year’s autobiography, I Know This Much, proved exceedingly well written and frank, what’s more. Many of his contemporaries – such as top Amazon reviewer Steve Jansen — believe that his perceptive memories of a London now transformed make a “a touching testament to spiritual growth”. Jansen writes:

“The real value of I Know This Much, aside from its glistening prose, is in witnessing someone discovering themselves. Always something of an odd penny, the Spandau songwriter and arguably its spiritual leader was always wiser than his pop position called for, and his working class soulboy roots never really sat comfortably with his angular New Romantic entrance. This rendered him somewhat pretentious to many, and his flaunting of left-wing politics often grated when framed by his band’s timely, aspirational image.

“However, with the benefit of distance and maturity (and following his time in the wilderness, as Joe Strummer would say, when discussing that inevitable period between an artist’s fall and his redemption), Kemp is able to reflect with great poignancy on a young man’s journey into, and through the shining city of dreams. In Kemp’s case that city, metaphorically, but more often literally — and literary in its evocation — is unmistakably London, and the metropolis is ever present like a ghost, framing his actions and attitude . . .

“From the sheer and challenging poverty of his childhood, through to the sensitively handled, near tear-jerking account of his parents’ death within days of each other in 2009, money and success is always comes second to recollections of his brother, mother and father. Kemp is evidently, despite his aloof lone wolf image, a highly sensitive and lovingly loyal chap, but this is an identity that he has to arrive at; and time and the ravages of age are the consequential pain of his slow lesson.”

The new paperback edition from Fourth Estate brings us up to date with a postscript on the band’s reunion.Rock journalist Robert Sandall of The Sunday Times made Kemp’s his Book of the Year: “A sharply observed account by a quintessential London musician. Kemp exudes confidence, candour and a keen appreciation of the capital’s club culture” … “Sets a new standard for rock memoirs,” says rock writer Paul Du Noyer … “Deeply cool,” says the deeply cool actor Bill Nighy.

➢ Barbara Ellen interviews Kemp in the Guardian on his autobiography: “a fascinating slice of social history”