❚ A LIGHTNING-FAST PHOTOSHOOT with Lady Gaga (above) was previewed before Christmas at Showstudio, the showcase website directed since 2000 by Nick Knight. Today Knight ranks among the world’s most original fashion photographers, but his association with i-D, launched as a street-style magazine in 1980, goes back to its earliest days. On i-D’s fifth birthday he photographed 100 “People of the 80s” (➢➢ link below) who had all appeared in the magazine’s formative issues.

During December 2009, as part of his Fashion Revolution exhibition at London’s Somerset House, Knight photographed a further 100 of London’s current creative leaders — including models, actors, musicians, artists and Lady Gaga — in the space of 20 days. 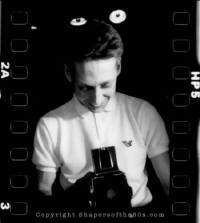 The snapper snapped: Nick Knight caught framing up yours truly during the i-D shoot, June 6, 1985. Photographed © by Shapersofthe80s

Knight says: “We started saying that we were going to do five portraits a day, so we did five one the first day and we thought it felt too easy. So we pushed it to 10, it felt reasonable, but then we sort of let things happen and we were looking at 20 a day!”

The 100 portraits are slated for inclusion in i-D’s 30th anniversary issue later this year, with video portraits captured from each of the sitters viewable on Showstudio in the weeks before publication.

➢➢ For more pix and the full monty on i-D’s metamorphosis from stapled fanzine to international fashion glossy, read on here…

This entry was posted in Culture, London, Media and tagged i-D, Nick Knight. Bookmark the permalink.