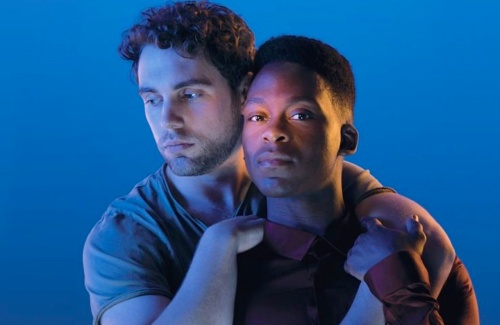 Romantic leads in Leave to Remain: Billy Cullum as Alex and Tyrone Huntley as Obi

“ The story focuses on the fast-moving tumultuous romance between a young upwardly mobile inter-racial gay couple embarking on what seems to be a hasty marriage of convenience in a Britain seemingly ill at ease with immigration and suffering status anxiety. Obi (Tyrone Huntley) is a rather conservative well educated son of a first-generation Nigerian immigrant, and has started a relationship with visa-less American Alex (Billy Cullum). Alex’s US employer is planning to relocate from London and in order for him to remain in the UK, he proposes a civil partnership with Obi.

“ This is where the play comes alive. What should be joyous news elicits feelings of apprehension as childhood upbringings reveal contrasting experiences of coming out to loved ones. It is these differences that drive the play forward and there is some laugh-out-loud hilarity from Alex’s visiting liberal parents.

“ Tyrone Huntley’s charismatic performances have been acknowledged by an Evening Standard Emerging Talent Award. As an ensemble, the Lyric cast is strong. . . As Okereke is one of a few out black singers, I’m assuming this is autobiographical material and the songs reflect his roots with percussive African highlife rhythms and language peppering the show’s original mix of EDM soundtrack.

“ What set this show apart are the interesting modern dance moves by director/choreographer Robby Graham that fuse all characters while the two leads move in a beautiful balletic embrace. This intimacy is rare to see for a gay couple on the London stage and it’s something that LGBTQ audiences have been quite starved of. It’s a tribute that both leading actors convey touching believability. . .” / Continued at APolarisView

➢ Leave to Remain, a modern love story with music, is written by Matt Jones and Kele Okereke, directed by Robby Graham, and runs at the Lyric Hammersmith, London W6 0QL, 18 Jan–16 Feb 2019