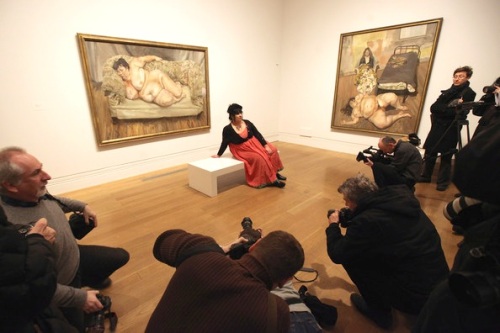 Posing for the press: Sue Tilley, whom Lucian Freud painted in Benefits Supervisor Sleeping 1995 (left), seen at the Lucian Freud Portraits exhibition this week at the NPG. (Photo by Oli Scarff/Getty Images Europe)

❚ YESTERDAY SHE WAS QUIETLY CHUFFED on her Facebook page. This morning she’s a hot topic in the national papers. And for the next four months Sue Tilley is all over the National Portrait Gallery in a retrospective exhibition of the British painter Lucian Freud, who died last year. The 80s nightclub doorgirl known as Big Sue is famously the subject of Benefits Supervisor Sleeping, the most valuable painting ever to be sold by a living artist. Freud’s nude portrait of Sue — since promoted from benefits supervisor to manager of a Jobcentre Plus in central London — acquired its unique status after it went under the hammer for $33.6m (£17.2m) to Roman Abramovich, the ninth richest person in Russia, at Christie’s New York in May 2008.

She said at the time: “My life’s changed overnight. I’m beside myself, but then lovely things are always happening to me. Still, I’m not surprised — in a way, I always thought this might happen. I love that painting.” There are four paintings of Sue in the new exhibition. She said: “I like two of them, I don’t mind one of them and I hate one of them.”

London clubland knew Sue from vetting the door at Taboo, Leigh Bowery’s now-fabled one-nighter, on Leicester Square from 1985 to 87, as well as the Abba night off Hanover Square. After Bowery — a performance artist and “an icon of outrage” — had become a model for the painter Freud, he introduced them and Sue also posed for a series of portraits in the mid-90s. After Bowery died of Aids in 1994, she was invited to write his obituary for The Guardian, which directly inspired his biography, Life and Times of an Icon, which was published by Hodder in 1997.

The first most of us knew of this new round of fame was an uncharacteristic namedrop on Facebook about 9pm on Weds…
Sue Tilley I just met Kate Middleton and she was completely lovely.
Michael D Herbage She just texted the Queen with excitement at meeting you!
Claire Lawrie Was she signing on?
David J Deaves She didn’t pose naked for Lucian, did she?
Alison Atkinson Maybe you could ask her to hook you up with her brother-in-law!
Amanda Foxley Wow — just saw u on tv here in Australia, fantastic!
Tami Longhurst Hi Sue,  Just saw you on the evening news at the National Portrait — they said that Kate met Sue Tilley Lucian’s “most famous sitter”.  Fantastic. 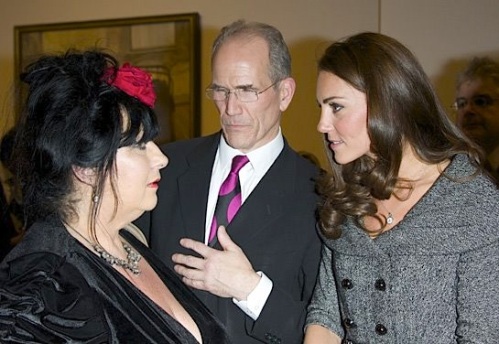 Finally Sue couldn’t resist posting the photo of herself talking to the Duchess of Cambridge, aka Kate Middleton, wife of Wills, our future king.

Facebook Thurs 4pm…
Sue Tilley Right… now I’m really showing off. [Posts the above pic, wow!]
Charlie Condou Kate’s saying, “Didn’t we meet once in the loos at Kinky Gerlinky?”
Sue Tilley Charlie, you’ve hit the nail on the head… Then she said, “Do you wanna come up Trannyshack afterwards?” I asked her where she got all the jokes she puts on Twitter!
Dean Bright I saw you on News at 10.
Emma Peake Thrilled to see your Christmas necklace making its royal debut — a vicarious delight!
Sam McKnight She’s eyeing your do. Mark my words the “Big Sue” will be the new Pob!
Gary Irwin Is that Sven Goran Eriksson?
David Power Sue, are you inviting her to Taboo?

Laters…
Sue Tilley After all yesterday’s excitement I’ve now got to spend today finishing packing… It is a bit weird that tonight will be my last night in this flat I have lived in for 30 years… a lot of ghosts are going to be rattling about… Just paid maybe my last visit to Camden Town as a resident… Saw Rob the handsome contestant from the last British Bake Off, then a fabulous tranny and then a gorgeous lorry driver shouted “I saw you on the telly yesterday” … I’m going to miss the funny old place.

+++
➢ Video of the exhibition (above) by art blogger Katherine Tyrrell

WHAT THE PAPERS SAY

➢ The Duchess of Cambridge came face to face with one of Lucian Freud’s most famous nudes, Sue Tilley, as she attended her first solo public engagement…
“ Miss Tilley, 54, who goes by the nickname of “Big Sue”, laughed off the idea that she might feel awkward about the Duchess surveying her naked form. I’m not embarrassed about her seeing me naked — I’m a human being,” she said before the event. I may not be the most gorgeous one under the sun but that’s what I am.”

Benefits Supervisor Sleeping was bought by Roman Abramovitch, the Russian tycoon and Chelsea FC owner, for a record £17.2 million. Freud died last summer, aged 88, and Miss Tilley described him as “a marvel, really, a complete one-off”. She said: “Do you know, there wasn’t one bad moment sitting for Lucian, excepting the painting when I was lying on the floor — that wasn’t overly comfortable. But it was such an interesting experience. He’s a person you’ll never meet again. Really, he did what he wanted and that was that. I think that’s a trait to be admired. I wish more of us were crazy enough to do that. ”

➢ Duchess of Cambridge carries out first public engagement
without Wills
“ The 30-year-old duchess is taking advantage of the prince’s controversial six-week deployment to the Falkland Islands in order to make her mark as a working member of the Royal Family. [Kate] studied history of art at St Andrew’s University, where she met Prince William, coming away with an eminently respectable 2:1. ” (The paper noted she was wearing Jimmy Choo “Cosmic” heels.)

➢ Germaine Greer on the role of the artist’s muse — A muse’s job is to penetrate the male artist and bring forth a work from the womb of his mind.

➢ Lucian Freud Portraits runs at the National Portrait Gallery, London, Feb 9–May 27 — 130 paintings and works on paper loaned from collections throughout the world, from the 1940s right through to his last, unfinished work. Born in Berlin, he was the grandson of Sigmund Freud, the pioneer of psychoanalysis, and moved to London to escape Nazi oppression in 1933, though Sigmund did not flee until 1938. Lucian was known for his intense portraits, especially of nudes, and Time magazine critic Robert Hughes proclaimed him “the greatest living realist painter”.

➢ Event, May 24 at 7pm: Freud’s model Sue Tilley discusses her experience as a sitter with author William Feaver at the NPG