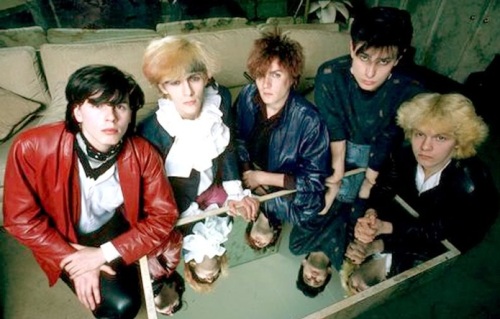 ◼ 30 YEARS AGO TODAY the Birmingham club-band Duran Duran released their debut single Planet Earth, less than two months after signing to EMI. It charted in mid-March, peaked at No 12, and bagged the band a spot on Top of the Pops, Britain’s premier music TV show. They were the first New Romantic band from outside London to make good, and this week the writer Steve Jansen claims that “inside of three short years, Duran were officially the biggest band on the planet”. He celebrates Duran’s birthpangs with a freshly researched three-day survey of their origins titled Switch It On! – Planet Earth & The Launch of Duran Duran, online at gimmeawristband.com which, though sadly defunct today, is preserved at the Wayback Machine. Jansen talks to all the main players involved during the run-up to the band’s chart debut — here are a few tasters from his epic story, published with permission…

+++
Extracts from Switch It On! – Planet Earth
& The Launch of Duran Duran:

❏ Bass player John Taylor recalls himself and Nick Rhodes, both Birmingham-born, founding Duran Duran as “young punks; we just wanted to get involved. To us, music was like a commodity. It was this word-of-mouth thing that brought you together with people; it made you your friends — and some of your enemies. It was the mixer.”

❏ Jeremy Thirlby, who was childhood friends with Rhodes, remembers: “None of us — John, Nick or me was gay — but that whole Kahn & Bell scene [around their fashion boutique] was very appealing to people like Nick because there was something going on; plus he’d always been into the slightly more surreal end of Bowie… Nick had always been single-minded, so it didn’t turn his head. He wanted to get somewhere else, and at the time Kahn & Bell was it.” 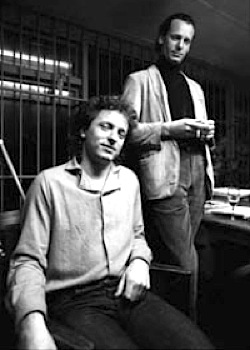 The management, 1980: Michael and Paul Berrow. Photographed © by Paul Edmond

❏ Duran’s co-manager Paul Berrow: “That unique relationship between [Duran’s] rehearsal room upstairs and the club — which was pumping six, seven nights a week down below — John and Roger, all they had to do if they were running out of inspiration was walk down one flight of stairs and they’d find themselves in a club with four or five-hundred people, with a very loud sound system.”

❏ EMI’s A&R man Dave Ambrose travelled to Birmingham to catch Duran in October 1980. Could he honestly have seen so much in Duran so early? “Honestly. Yes. I swear. This was going to be a very, very important band; I could see them being the next Queen. Simon was like this Elvis figure. Andy was a great craftsman, a really solid musician. There was John, this cool bass player. Roger, a still under-rated drummer. And then there’s Nick, like this Andy Warhol figure; and I thought, what an incredible combination.”

❏ In 1980 Beverley Glick was aka Betty Page at the now-defunct UK music paper Sounds. Paul Berrow invited her to Birmingham to meet his unknown band. Page had doubts: “I thought, do I really want to go all the way up to Birmingham to do this? [Berrow] didn’t even offer me a tape.” Upon arrival, Page was forced to reassess: “I’d never met a bunch of people who were so confident and focused, who knew exactly where they wanted to go; even more so than Spandau Ballet [London’s rival New Romantic band]. It was a kind of youthful arrogance that was quite appealing at the time. I don’t think they ever thought coming from Birmingham was going to stop them — in fact, I think they used it to their advantage really.”

Inspiration for Planet Earth: Rod Stewart’s UK number one and US number one single Da Ya Think I’m Sexy was released in December 1978. Most of the music was written by drummer Carmine Appice, and its disco-like arrangement was seen by fans as a betrayal of Stewart’s rock roots at a time when he gyrated onstage wearing tight spandex. The song has a further history. Its refrain was similar to the melody in the 1972 instrumental, Taj Mahal, by Brazil’s popular singer-songwriter Jorge Ben Jor. In an ensuing lawsuit, Rod agreed to donate the profits from his song to UNICEF

❏ Andy Taylor, Duran guitarist: “The essence of Planet Earth came from Da Ya Think I’m Sexy? [from December 1978] which Rod Stewart reckons was brilliant. The synth-guitar hook line that kicks off the tune is played on the same scale and key; the first two chords Dm7 & F are the same, so the melody/ counter melody lines are interchangeable.”

❏ Michael Berrow remembers Bob Lamb who produced Duran’s demos back in 1980: “Bob did a great job on Planet Earth. Bob’s arrangement is pretty well what made the final recording.” When EMI came into the frame, however, Lamb was laid off in favour of Colin Thurston. Lamb said later: “Colin was more fashionable than me at the time. I bumped into him at a studio in London and Colin said to me – and I quote – ‘I owe you a house’ (laughs) — which I’m still waiting for!”

❏ Graphic designer Malcolm Garrett reveals why the 12-inch sleeve of Planet Earth (the Night Version) looks different from the regular 7-inch version: “Economics. I don’t think they had much money, and they didn’t expect it to sell. Hence, they only gave me two colours to print with.” 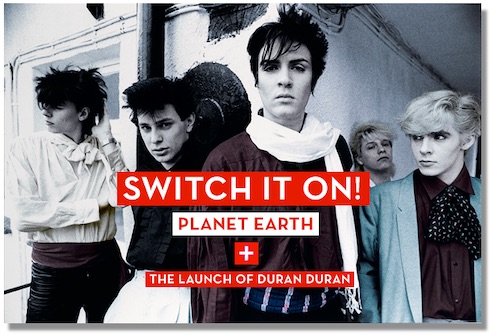 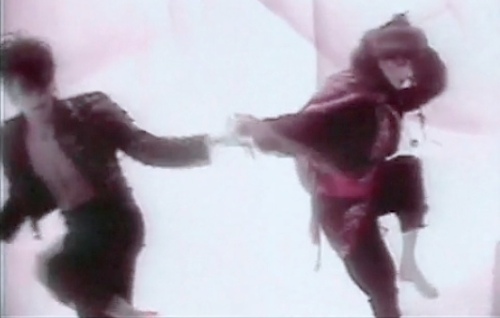 The New Romantic Jive: Rum Runner regulars Gay John and Lavinya (aka Patrick Black), dressed to the hilt and dancing in the official 1981 video for Planet Earth, co-directed by Blitz Kid Perry Haines and Russell Mulcahy