1981, The Romantics – a mainstream deejay’s guide

➤ Who are the New Romantics,
what are their sounds,
and how do they dance?
First published in Disco International, June 1981

By spring 1981 when no more than two dozen new image bands had lit up the UK charts with New Romantics colour, Peter Harvey, the savvy editor of the mainstream disc jockey’s bible, Disco International, offered money to have me explain how a local “nitespot” could attract the Pose Age crowds. For that reason this nuts-and-bolts item might feel a bit like a fool’s guide constructed by Wikipedia . . .

The Blitz 1980: this week if the theme is space cadets, we dance like Major Tom. Photograph © http://www.homersykes.com

◼ IN THE WAKE OF THE NEW MOVEMENT led by Spandau Ballet, Ultravox, Visage and the like, there’s the inevitable scramble to understand exactly what is going on. According to the pundits, this new style is going to put British music back on the map, yet like most “new waves” the impetus came from a select group of innovators who were determined to create their own scene. Elektro Diskow it was called and the people who followed this trend became labelled the New Romantics. As a cult it’s got the lot: up-beat music, dreamworld lyrics and clothes as weird and distinctive as the dancing.

This movement is a progression from London’s Seventies soul clubs. It has been developed by a fashion-conscious crowd of party-goers, into a social scene in which the look counts for as much as the music. All the deejay needs is taste – and a very low profile, because this is one cult (and Spandau Ballet the first band) which the kids created for themselves without any help from hypesters in the music business or the ragtrade.

They started their own clubs to avoid being stung and their glamour-on-a shoestring is an attempt to sidestep boutique price-tags. Homemade or whatever, anything goes so long as the clothes display imagination. In London last year the Blitz club set the pace by plundering Hollywood’s heyday: out came Garbos and Valentinos, buccaneers and sashes and breeches, and those oh-so-vital dancing pumps. One look lasts a day, they said. Invent a look; invent a dance. Then change them.

If this sounds like the last word in posing and preening, there’s much more that the guy who merely spins the records must accept. Spandau Ballet’s aim was to sweep away not just the drabness of punk but its pessimism: dress your best and you’ll get ahead; dress UP and we’ll all become stars. And because enough of London’s original Now Crowd went up and over the top, the press came buzzing and suddenly the Blitz Kids did become stars. This had involved teamwork of the most sociable kind and however many friends a deejay alone can pull in, he needs collaborators who can set the right tone on the club’s door itself, just like New York’s Studio 54, except with attitude in place of bling.

The exhibitionist Steve Strange still comes as a shock to the eyes, even now we know him as frontman for Visage. At 21, he can claim to have led Britain single-handedly into the new Pose Age. But it took his gifted partnership with the golden ears of Rusty Egan, 23, to revolutionise London’s club scene. With Egan as deejay and Strange as greeter, the legendary Blitz – which was a rundown wine bar on its last legs – and many other clubs profited from their skills at selfpromotion. What they did was to perfect the portable party, a strategy that’s saving many a club today from closure on its weakest nights. Friends simply rent the venue once a week for a cheap night out: they enjoy all the facilities of a nightspot and, by dressing with pazazz, the ambience of a cabaret.

“Everyone stays mobile. It’s not like old-fashioned discos with people propping up the bar”

Filling the place simply means throwing a party. “That’s why control on the door is important,” Strange says. “If you want a friendly party, first you’ve got to select guests who are sympathetic, then keep out the football fans and the ones looking for a three o’clock bar.”

Think of an elektro-diskow as a stage on which the week’s entertainment is provided by and for a bunch of friends and you’ve immediately got less of a pick-up scene, more of a social occasion. Out go flashing strobes and crashing decibels and in come soft lighting and quieter areas where people can chat and watch videos. Bright lights belong at the bar so everyone does get a chance to show off their clothes but the main idea is to keep circulating.

Richard Burgess, Spandau Ballet’s producer, says: “Why I like Fridays at the Beat Route in Soho is because everyone stays mobile. It’s not like old-fashioned discos with people propping up the bar.” Burgess, along with Egan, is one of the new generation of drummers who’ve fused European electronics with funk and reprogrammed disco with a futurist heartbeat. Elektro-funk has brought elektro-dances. At the Blitz’s height, it was the invasion of black trash-music that saw better dancers seeking newer futurist rhythms, to which they adapted the Hustle, while Kraftwerk’s We Are The Robots inspired clockwork-driven angle-poise dance moves. Dancefloor lighting was basic, clothes severe and, since nobody wanted their makeup to run, movement was stylised and exertion kept to a minimum.

Vizier or concubine? George O’Dowd photographed in Wardour Street during his harem phase, © by Derek Ridgers

“Today the mood is much more ethnic,” says Robert Pereno, 23, of the explosive elektro-dance troupe, Shock, who in one year have become the futurist rivals to Hot Gossip. “The transition was gradual: Rusty was very clever not to play just cold electronic music. After Kraftwerk he’d put on a mover like Gina X. There’s been almost a reversal from robotic animation towards the jungle. Look at the way two of our troupe, Tik and Tok who both had mime training, perform Angel Face and compare that to our next record, Dynamo Beat, which is very latin. It’s always down to the individual deejay, though, to develop his own style.”

If one number has become the anthem for Pose Age people, it is Bowie’s Fashion and the video which captures the sound and style has to be Ashes To Ashes, featuring both the clothes of up-coming designer Judi Frankland and kids Bowie borrowed from the Blitz itself. Video screens are becoming an essential asset to any club. Steve Strange says: “Rusty and I take a marvellous three-hour tape on the road with us: it’s an amazing compilation of promos that have hardly been seen for bands like Kid Creole, Ultravox, The Cure, Kraftwerk and Grace Jones. It’s a great way of showing how many varied styles the scene covers.”

And if some sounds date back from ’78-79, don’t be deceived about their currency: they’re classics. Only one name is taboo in the elektro-world: Gary Numan.

Life as a photo call: Dick Breslaw, Clare-with-the-hair and George on the town in 1981. © Shapersofthe80s

➤ Rest of the New Romantics
package from top to toe

Four basic styles have emerged since disco went elektro. They owe more to stylish swaying motions than pelvic gyrations. Control is essential: the chin provides a focus; footwork is immaculate. Above all these are personality dances where your own variation wins.

The Ballet sway: clearing the floor at the Blitz

1 ELEKTRO HUSTLE Easiest style, solo or for two. Began with Moroder’s The Chase as development of The Hustle (1976). Lots of posey swaying. Variations include high steps, waxed feet and jelly knees. The Ballet Sway is the live concert variation for a restricted space near the stage, featuring wobbly heads and twitching shoulders. Devoted audiences move as one when syncopating the from-the-waist, sway-and-pause-and…

2 THE ROBOT Self-centred hi-tech technique for the committed non-dancer. Features raised elbows, hand-passes and other frozen extremities. Ideal with Kraftwerk. For obsessive posers and geeks.

3 THE WARREN STREET JIVE (below) For born dancers and style-leaders such as the Blitz Kids of Warren Street, said to have been pioneered at Billy’s by Andy Polaris and Jeremy Healy. Adapted jive with exaggerated added sway and knees rising to waist level, while partners keep both hands clasped to each other’s. Ideal to Don Armando’s I’m An Indian Too. Variations include reverse kicks, jack-in-box bounces, giant whiplashes. Measured not frantic, yet exhausting to watch. Visible being demonstrated in Spandau Ballet’s video for To Cut A Long Story Short, and in Duran Duran’s Planet Earth. 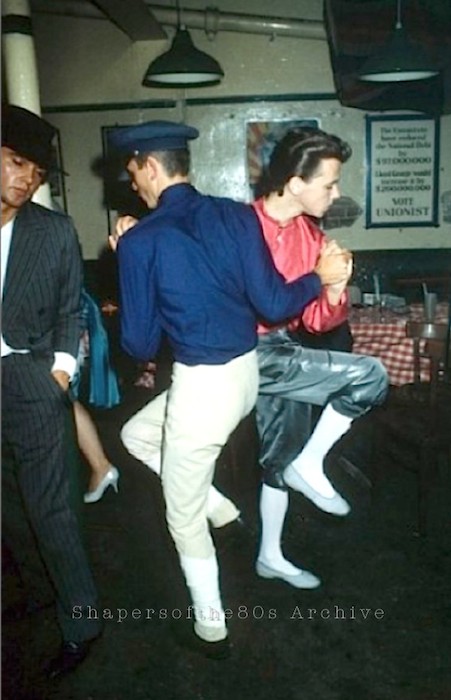 Blitz movers: The Warren Street Jive at its coolest – once thought to be Lenny and Lee cutting the rug, recently recast as French Luke (Luc H) and St Sebastien wearing Battiloni of Paris with ballet pumps by Renoma (after waxing his legs beneath silk stockings)

4 THE GROUCHO French import that arrived with the Ze label from the Bains Douches club in Paris. Learn with B52s: knee bends on beat, rise and fall, moving knees and shoulders in opposite directions. A cross between Groucho Marx’s famous creep and cossack leg-kicks while crouching. Exposes dancer to ridicule unless ultra-cool.

“Style is not what you wear but the way you wear it. Fashion is the way you walk, talk dance and prance,” says Perry Haines, editor of i-D, the movement’s magazine. Hairstyles are a focus, and anything that breaks the rules of fashion: blue lips or an 18-inch rise on trousers. Take a theme – and twist it. And never copy anyone else (even Steve Strange). Strange says: “Within days of my Bonnie Prince Charlie look appearing in NME, I passed myself three times in King’s Road. So I dropped it right away. The idea is to express your own individuality and ‘fancy dress’ is not the answer. Dressing up for me is a way of life; everyone should experiment for themselves.” Since Strange can’t please all sorts, three basic camps have emerged:

Pernod – with EVERYTHING (blackcurrant, cider, Guinness).