◼ HERE IS A PICTURE OF ROSS WILLIAM WILD amid musicians of Mercutio, a seven-year-old “alternative and experimental” rock and grunge band, only four months after he was showcased in concert as the stunning youthful replacement for Tony Hadley in Spandau Ballet, the 80s New Romantic pioneers. After Hadley had walked out a year earlier, Spandau hoped Ross would be their key to being signed for this year’s landmark rock events from Glastonbury down, but so far no plans have emerged. Suddenly out of the blue, yesterday Ross announced at Facebook: “My new band! Come rock out with us on April the 13th in Camden!” He features prominently in the band’s new photographs.

Coincidentally Spandau songwriter Gary Kemp is currently in North America channeling the guitar of David Gilmour with Nick Mason’s Saucerful of Secrets tour, while Martin Kemp and Steve Norman are also boasting busy diaries. Otherwise, both Ross and Spandau have been zip-lipped silent, which raises the suggestion that what gossips tend call “creative differences” might perhaps be simmering away under the lock-down of signed contracts.

Mercutio were offering no further clues, except in their publicity. This all-Italian band who work in London are advertising future live dates starting in April at The Monarch in Camden followed in June by the CamdenRocksFestival. Ross’s Instagram photos show he has been in rehearsal on a #secretproject #itallianscottish with the band since January. He is also pictured rehearsing at home in what he tags as #singersongwriter #makeshiftstudio #homestudio. 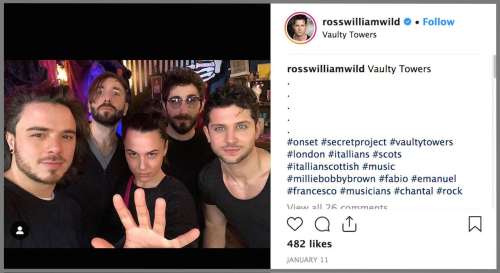 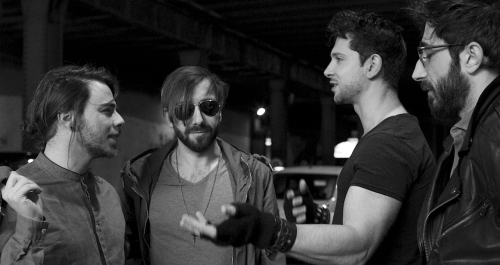 Ross Wild photographed with Mercutio for their website by Giorgio Lattanzi

❏ A couple of days have now passed, and it’s been good to reach Ross by phone, at the suggestion of the founder of his new band, Gianluca Cucchiara. I told Ross that his sudden announcement was all the more surprising because only last month I’d bumped into Gary Kemp and when asked about Spandau’s plans, he would say only “There is no news”. Nothing more.

Ross replied: “I know. It’s all so shrouded in mystery at the moment. The main thing is Spandau don’t want to just go out and do a bunch of shows for the sake of it. The next step must be something great. It must break the mould. So we’re throwing ideas around for new music. Unfortunately Gary has commitments, so we’re waiting for him to finish until we crack on. Same for Martin and Steve.”

Mercutio publicity: poster for the Camden festival includes Ross in the lineup

Surely, though, it’s a bit strange to join another band when his Instagram still describes Ross as “Lead Singer @SpandauBallet”? He said: “I can’t wait around for Spandau! I’ve been a songwriter all my life – it’s a natural thing for me to do. I met Gianluca at a workshop a year ago and we gelled so well. But I said I’d got another band and couldn’t really talk about it before Spandau announced my role. I’ve been into rock music and metal all my life, and always wanted to pursue it, then the right musicians came along.”

So how does his new sound square with Spandau’s very different music? Ross said: “I’m into absolutely everything. I’m not a one-genre guy by any means and this new band Mercutio reflects that. It’s not death metal and it’s not thrash but very much metal with melody at its heart, plus a heavy focus on lyrics and story-telling. It’s a different flavour but it’s the same heart really.”

Mercutio are working on a full album. The first single will be recorded soon and it’s called Where the Pain Lives. Of his own role, Ross said: “I’ve written lyrics for it along with Gianluca and Fabio the guitarist. Then we picked up one of my own songs called Alex – more melodic and melancholy, a funky feel with a big emotive chorus. We’re chuffed that we’re going to debut these tunes in Camden for an album that is very Nirvana-esque mixed with Muse.”

As for the lack of news from the Spandau camp, Ross said: “We’re talking all the time about what to do at the end of the year. It all depends on 4-5 guys juggling their schedules. Nothing is yet set in stone. Put it this way: we’re not finished.” So the message is optimistic? “Absolutely, without a shadow of doubt. I’ve met a bunch of new best friends doing Spandau Ballet. . . I have my own ideas about marketing strategy but at the end of the day Steve Dagger’s the boss, so you’ve got to roll with it.”

A BAND WITH A LONG PAST BUT FEW TRACES

◼ MERCUTIO’S FOUNDER GIANLUCA CUCCHIARA also multi-tasks. He got in touch this week to say: “I’m currently producing with Giovanna Romagnoli a new musical called Vanara, with my own music and orchestrations. Giovanna has an Academy Award for Cinema Paradiso and is also producing Mercutio with Diverge Records. Ross was one of the leads in a workshop we did last May in London” [only days before Spandau announced Ross as their new singer] “and the cast included also the Tony nominee Eva Noblezada. I simply asked Ross if he was interested in collaborating with me on a rock project as he loves pop and musical theatre, but he also is a big fan of grunge and hard rock. We share an incredible passion for bands like Tool, Nirvana, Muse (to name a few).

“A few months after the tour with Spandau, Ross and I started writing some songs together with my friend and guitar player Fabio Staffieri. In the band we have also bass player and producer Emanuele Nazzaro and drummer Francesco Lucidi. Francesco will be Elton John’s drummer in the biographical movie Rocketman coming out at the end of May.”

It is still a curious fact that Mercutio seem to have no public profile at the major reference websites Discogs, AllMusic or Wikipedia. Evidence of their existence comes from their own website which lists their first tour details starting 21 Sep 2011 at Nambucca in London to their last tour ending on 18 June 2016 at the Tram and Social. This year new dates have been announced for six gigs in April and June.

Other slim details about Mercutio online include three gigs in Rome and London between 2014 and 2016 which are documented at ReverbNation, where we can hear the breathy vocalist covering a rocky Karma Police after it opens with a lush string orchestration. We can however view videos there for No Compromise, a pained romantic ballad, and a grungy tease-trailer for the band inviting us to “Smell bass, hear speed and taste rock”. Reverb comments: “Taking influence from Radiohead, Muse and Porcupine Tree, the guys wrote, recorded and toured together for several years in various bands before forming Mercutio.”

Though Mercutio haven’t been active for a couple of years, it doesn’t faze 30-year-old Ross. He said: “I don’t care. I’m making them work and they’re making me work. Right now, I’m looking forward to a summer tour with Mercutio in the UK and Italy, maybe some festivals. The team behind it is phenomenal. Gianluca is an amazing composer and orchestrates our music brilliantly. It feels brand new to me and will feel brand new to the audience.”

❏ UPDATE FROM ROSS: He has now posted the Mercutio publicity poster at Instagram and adds the words every fan wants to hear: “Yes, I’m still happily with @spandauballet but until our next tour I’m staying creative with this bunch of amazing musicians.”