➤ Ross leaps out of the Ballet into the cauldron of grunge 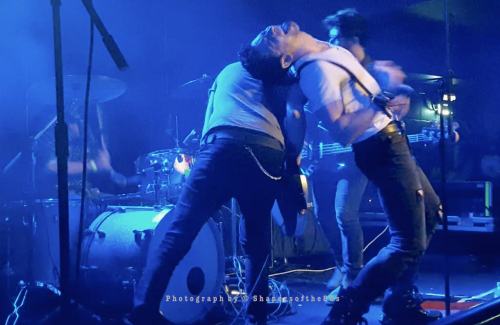 Moment of bromance for Mercutio: Fabio and Ross nuzzle each other like wild beasts onstage at Dingwalls

◼ TODAY “Ex Lead Singer @spandauballet” Ross William Wild fronted only his second gig with his new band Mercutio whose sound is “Nirvana-esque mixed with Muse – very much metal with melody”. Playing Dingwalls this afternoon, Ross’s emotional vocals seemed wrenched from his soul, drenched with introspection and yet were fierce in their delivery.

The first of six mainly melancholy songs from their new album made a big opener presumably titled by Ross, Where the Pain Lies, with two fingers aimed squarely at the Spandau gang who have recently spurned him. In other numbers such as Shed and Playtime the tall muscled Scot twisted and contorted his body, stamping, pogoing, even throwing himself to the floor, as if being tortured by demons from within. There was also a bromantic moment when Fabio and Ross nuzzled each other’s backs like wild beasts. 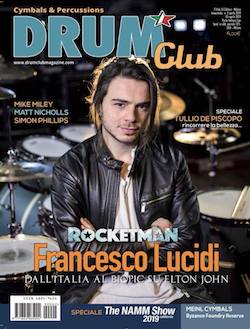 Ross’s performance was infinitely more physical than his outings last year with Spandau Ballet – the UK’s supergroup from the Swinging 80s – and the tiny Dingwalls stage clearly cramped his style. Just relaxing a bit might help establish rapport with the audience nearest to him instead of reaching for the back of the room.

The Dingwalls sound system did his voice few favours, though at its most romantic his relatively high register succeeded superbly against the essential grunge vibe, as in the song called Alex, and became sorrowfully plaintive in the medium-pace closing number The Ghost.

The support from his new Italian pals is strong: Naz on bass provides a melodic anchor through even the quietest moments, while Fabio on guitar dazzles frequently when the tempo needs raising, as does Francesco who you may recognise playing Elton John’s drummer in the current biopic Rocketman. The band’s first video is expected next week.

Mercutio at Dingwalls: Ross centre-stage in his second live gig with the new band

Mercutio at Dingwalls: Ross on acoustic guitar, Naz on bass

➢ All about the Italian-Scottish four-piece called Mercutio

6 JUNE UPDATE: ROSS’S FIRST VIDEO POSTED ON THE ANNIVERSARY OF HIS SPANDAU DEBUT!

❏ Double fierce! “For a second I thought I’d found my place.” Ouch!!!

➢ Previously at Shapers of the 80s: Spandau vocalist Ross rocks fans by announcing his own new band Mercutio