✧ Synth-pop legend Vince Clarke confesses that “synthesisers seemed easier to play”! The co-founder of Depeche Mode, Yazoo and Erasure now lives in the USA and shows Motherboard.tv over his collection of holy-grail analogue instruments

✧ Animal Nightlife’s Mr Solitaire on Top of The Pops 1984 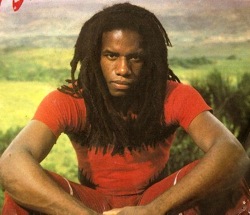 ✧ A treasure trove of pop videos has been brought out of the attic at the YouTube channel memorylane1980s from tapes that were recorded live. Currently the hoard goes only up to the end of 1984, everyone from the Smiths, New Order, Simple Minds, OMD, Bob Marley, Womacks, Nick Heyward, Matt Bianco, Jimmy the Hoover, Eddy Grant and all the pop supergroups

✧ Young guns go for it – the story of Soft Cell

NOT FORGETTING THE LEGENDS

➤ The horror, the horror — video excesses

❖ Biddie and Eve in cabaret at the Blitz club in Covent Garden, 1979

❖ We would have run away to join Human League say singers Joanne Catherall and Susan Sulley, from 1982

❖ Oh no! The bad news is that Ricky Gervais has taken down his seonadancing.com website and its priceless vids of him going through his New Romantic phase in 1983 (protests to rickygervais.com). However – the good news is that one YouTuber has reconstructed his Bitter Heart video from salvaged clips. It originally cost £300 to make and is worth a million dollars today! Give us a smile, Ricky

✧ If Bowie was the father of the New Romantics, Visage were his children: Visage on Pop Years 1980

✧ How John Foxx gave way to Midge Ure: Ultravox on Top Ten New Romantics – “They were a real electronic group … and they were Romantic,” says Rusty

✧ Two lads from the Wirral launched a dance on the Factory label: OMD on Top Ten Electropop Pioneers

❖ Visage and New Romance dissected on Pop Years 1980: cheekbones, Chinese slippers, and even a touch of makeup

❖ … likewise at MannaMachine69 – from Clare Grogan to Tiswas, Blackadder, Kenny Everett and Scalextric