➤ Charlie Gillett, the man who defined rock’n’roll and world music

Charlie Gillett at BBC Radio London: he presented the influential Honky Tonk from 1972 until 1978

Posted March 18,2010… One of the most enduring influences on the British and other music scenes died yesterday. Charlie Gillett was a passionate music publisher, journalist, author in 1970 of the first serious book to appraise the birth of rock’n’roll, and a much-loved deejay who presented “possibly the most engaging show on British radio”.

In 1997 he celebrated some of his discoveries in a massive Sunday Times reference work, 1,000 Makers of Music. He was part of a panel who first coined the term “world music” and from 1999 became internationally renowned through the BBC World Service. From January this year, for health reasons, Charlie decided to take a rest from his work. This morning, his own Sound of the World website was inundated with tributes, while Charlie’s choice of music was still streaming at his djjackdaw page at MySpace, along with a beautiful and resonant video of the French chanteuse Soha singing C’est bien mieux comme ça…

A SELECTION OF TRIBUTES TO CHARLIE

❚ Richard Williams in the Guardian on the radio deejay, champion of world music and author of a major history of rock’n’roll

“Few people can have opened so many ears to such a variety of music over the last four decades as Charlie Gillett, the author and radio disc jockey, who has died aged 68 after a long illness. Charlie wrote the first serious history of rock’n’roll and went on to become a central figure in drawing together the confluence of international sounds that became known, to the benefit of many artists whose work might otherwise have remained in obscurity, as world music.

“The radio was Charlie’s medium, and from Honky Tonk, his 1970s Radio London show, to his weekly BBC World Service broadcasts in recent years, he nurtured an audience whose loyalty to him and belief in his integrity were unshakeable… When The Sound of the City was published in the US in 1970, to great acclaim, his reputation was established.”

Charlie with Ben E King in 1972. Picture by Doug McKenzie

❚ In 2004, Charlie himself marked the death of the British radio deejay John Peel, the giant force behind British pop music, with these words…

“Ever since he started playing records on British radio in the mid-1960s, John paved the way for every other maverick DJ with a burning desire to play their own choice of music on the radio. To a greater or lesser extent, each of us staked our identity through differences in approach from John. He and I both dated our secret desire to get involved in music to the period of a few months in 1956 when we each heard Gene Vincent, Elvis and Little Richard for the first time. Some time later, we each fell under the spell of Jimmy Reed’s beguiling mumble.”

❚ The Times: Broadcaster who became one of the most influential voices of his day and pioneered an appreciation of world music… 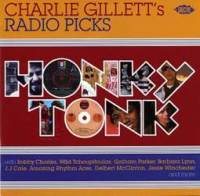 “[Gillett’s Radio London] programme became hugely influential, popularising American roots music and unearthing British acts such as Dire Straits, Elvis Costello and Graham Parker, all of whom received their first exposure on his show before any of them had signed a recording contract. He also co-managed Ian Dury and discovered Lena Lovich.

“In the 1980s he became enamoured with world music and, long before Andy Kershaw hit the airwaves, he played a pioneering role in spinning little-heard records from Africa, the Indian sub-continent and beyond on the radio. Turning his back on Anglo-American pop, he continued to champion world music for the rest of his professional life, earning the sobriquet ‘Mr World Music’ and two Sony radio awards for his ground-breaking shows along the way.”

❚ It’s 23 years since a bunch of activists labelled a box to help sell records. fRoots reunited the World Music creation gang who coined the term…

“His broadcasts brought together music and radio fans from far flung corners of the globe. His postbag was one of the biggest, most affectionate and diverse in Bush House, which confirmed his special place in listener’s lives. He was a very special broadcaster.”

❚ Ian Anderson interviewed Charlie for fRoots in Aug 2001…
“Charlie’s not just the guru of world music radio [and assembler of the state-of-the art world music CD compilation series, World 2000 to 2007]. His Sound Of The City was one of the first major books about popular music from the rock’n’roll era; his compilation Another Saturday Night was a major factor in breaking Cajun music in the UK.” 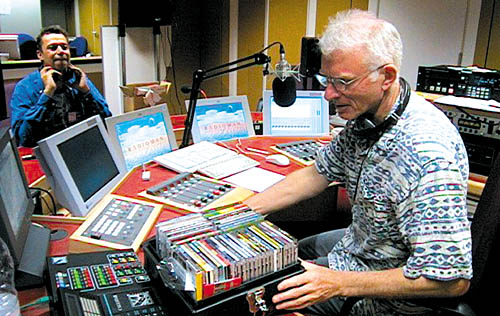