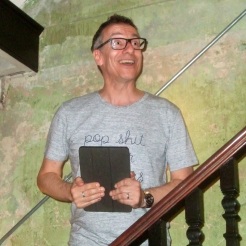 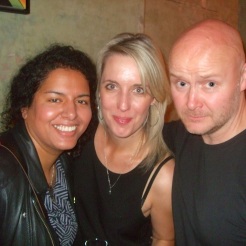 ◼ FRIEND OF THE STARS (1980s division) Paul “Scoop” Simper threw a launch party for his book Pop Stars in My Pantry (PSIMP) at London’s Union Club on Thursday. He was delighted to be in Greek Street, of all the streets in Soho, because that’s where his story began, at the legendary Le Beat Route club directly opposite.

He greeted fans and friends by thanking “all those 292 generous souls who pledged to make this book happen” via Unbound – the crowd-sourcing publisher. After thanking Unbound’s head of publishing Matthew Clayton, Simper outlined the debts his career owes to other commissioning editors, from Colin Irwin at Melody Maker who sent him a telegram asking him to review Bad Manners at Cardiff Top Rank. “That was when I learned that if you pop your copy in the post it will arrive about the same time as the music mag it’s meant to be in.”

Second, with encouragement from tyro hack Bob Elms, came the legendary Kasper de Graaf at New Sounds New Styles, a seminal pop monthly created in 1981. “He allowed me to interview not only the exciting New Pop stars like Spandau Ballet and ABC but write about more random passions like Hammer Horror, John Carpenter and James Bond.”

“Finally my other big break came courtesy of Phil McNeill. IPC Magazines had seen the monumental success of Smash Hits so decided to copy it with a new weekly pop mag called No.1. He rounded up various gunslingers from other titles. Mark Cooper, I believe you came from Record Mirror? Karen Swayne, from Sounds. And Debbi ‘The Vole’ Voller from My Guy. Phil encouraged us all and very kindly didn’t sack me for the occasional bit of misbehaviour.”

Simper also paid tributes to his wife, Katie Crowther, looking fabulous in a sequinned jump suit, and Jacqueline O’Sullivan who first served with Bananarama before teaming up with Scoop in “one of the most successful bands in pop history… Slippry Feet” which has been defined as “David Lynch in a disco”. And finally to the other power woman in his life: “Pop Stars in My Pantry would not be the story it is without my Mother, Mrs Simper. . . Sade, Frankie, Bananarama and George Michael all survived memorable encounters with that lady in the corner. So Mother, take a bow!” 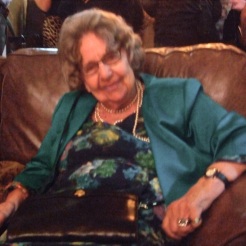 Power behind the throne, Mother, Mrs Simper, plus pearls. (A bit of a blur for one reason or another)