➤ Unseen photos inside the Blitz
by Terry Smith for Time magazine,
now exclusively at Shapers of the 80s
Posted on 21 May, 2018 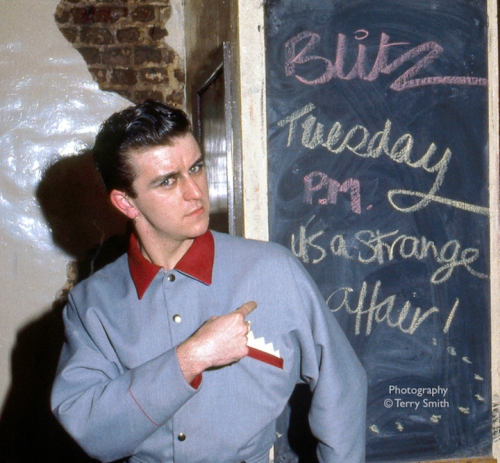 Never before published: Steve Strange sporting a Willy Brown two-piece on the door of the legendary Blitz Club in 1980

DAY ONE:
TEN FAB IMAGES OF THE BLITZ IN COLOUR

◼ AN ENORMOUS NEW CACHE of photographs of the Blitz Club in colour has been discovered from the spring of 1980 when the UK media started to take an interest in the Tuesday-night antics of the nightlife posers at Covent Garden’s Blitz Club. They were to become celebrated as the Blitz Kids by some and as New Romantics by others. Until this moment it has been easy to count the number of surviving professional pictures ever taken inside the Blitz during its 20-month life – all of them in black-and-white – and the total doesn’t even approach 100. Now a call to Shapers of the 80s by the British photographer Terry Smith has unearthed probably 300 more, commissioned by Time magazine. Many of them are in glorious colour, shedding extra light on the creativity of the night-owls who were in the throes of transforming the fashion and pop landscape of Britain in the Swinging 80s.

Shapers of the 80s today showcases the first of four batches of Terry’s pictures capturing the Blitz in colour, while a selling exhibition of his black-and-white images is preparing to open on 7 June in St Leonards-on-Sea [see below].

The emergence of what proved to be a new youth subculture in 1980 proved a curiously slow burn. Odd mentions of the Blitz began in the media from about February, most of which were explainable by virtue of the individuals they featured, any one of which you could easily have missed.

Then throughout March a flurry of media coverage was triggered by only the fourth live performance of Spandau Ballet, the image-conscious synth-driven house-band of the Blitz who boasted that their look was just as important as the new “elektro-diskow” sounds. This concert was reviewed in the London Evening Standard, Daily Star, Record Mirror and NME, while a set of photos headlined “Dandies in hand-me-downs” showed off their overdressed audience of Blitz Kids in the Standard’s fashion page too. Notably, a Daily Mirror photo feature deployed the “Blitz Kids” headline for the first time. 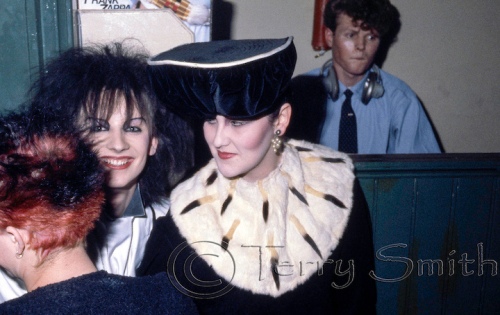 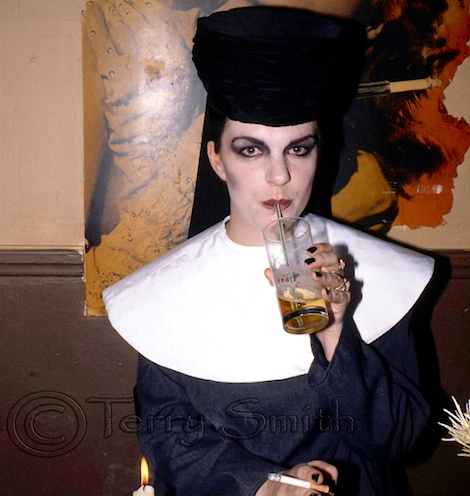 Judith Frankland, so smitten with The Sound of Music that she dressed like a nun (while smoking and drinking, natch) 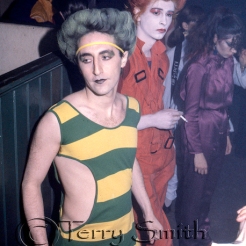 Splashing out in colour: Yet to become Mud Club host Philip Sallon with artist Harley Price in red bondage 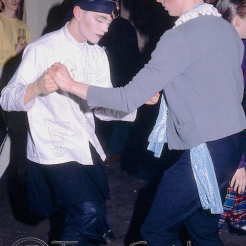 The Time magazine bureau in London had historically always been alert to new trends in Britain. As a former Time freelancer, Terry Smith told us: “Its London researchers scoured and clipped every national newspaper, leading magazines and periodicals. So my guess is that it was the accumulation of several articles in the British press that piqued Time’s interest. The story would have been discussed at the weekly story conference attended by Time’s entire editorial London staff (correspondents, picture desk, researchers) until the bureau chief was convinced.”

The American writer Ken Banta was assigned to the story as an intern with Time (not a staff correspondent) and an Ivy League scholar in his early 20s. Terry teamed up as the lensman on the case.

Do please let us know if you can identify
clubbers so far unnamed in Terry’s pictures
– via contact [at] shapersofthe80s.com

Terry says: “I swiftly made contact with Steve Strange to put his mind at rest that Time’s interest was not in any way disdainful, but rather to record what seemed an important social/cultural phenomenon. I cited Time’s famous 1966 cover story on ‘Swinging London’ and told him we would approach the Blitz Club in the same vein – I certainly approached this as a serious piece of photo-reportage. I was 35 at the time and so didn’t want to portray myself as at all cool, or give myself a ‘trendy guy’ persona. I went along to the club in a suit with three cameras around my neck with writer Ken Banta, who was wearing a polo shirt. We went looking as deliberately square as possible to emphasise that we were observers. 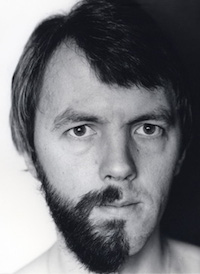 Self-portrait by Terry Smith, about 1975

“I think Steve appreciated the gesture and, for the record, with his impish and witty humour, I found him terrific company.”

During a career that embraced current affairs, Terry Smith has also photographed many actors, authors and musicians for US publications such as Time, People, The New York Times and USA Today. On his page at the National Portrait Gallery Terry talks of the collaboration necessary to achieve good portraiture. He says: “I like the expression ‘make a good picture’, rather than ‘take a good picture’, because most of my portraits were indeed made – ie, there is what I like to call a ‘contrived spontaneity’ about them.” His sense of humour especially is evident in the pictures that emerged of the Blitz Kids.

About the Blitz project Terry adds: “Even though Ken filed his copy on 17 April (a couple of days after we visited Blitz together, the story did not run until September. In the meantime, I went twice more, alone, to Blitz to update the photos. I shot both black-and-white and colour because at the time the magazine had not fully committed to colour.” Yet another turning point for the new decade!

➢ Elsewhere at Shapers of the 80s: Read the resulting Time magazine feature on the Blitz Kids in September 1980 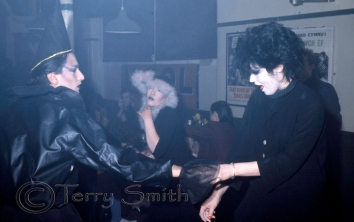 Leading the dance, Blitz superstar Peter Probert: by day clerk with an insurance company, by night a wicked witch of the west… At centre, Tracey Rivers with her marabou trim – but can you identify the other dancer? 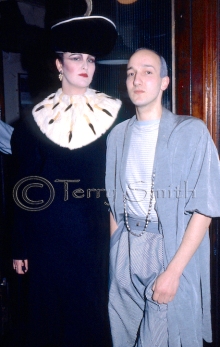 We are Fashion: even as a St Martin’s student Fiona Dealey made bravura statements… as did milliner Stephen Jones 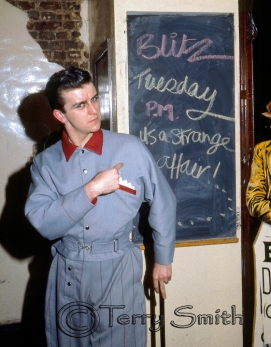 Steve Strange, co-founder with deejay Rusty Egan of the legendary Tuesday night at the Blitz in London 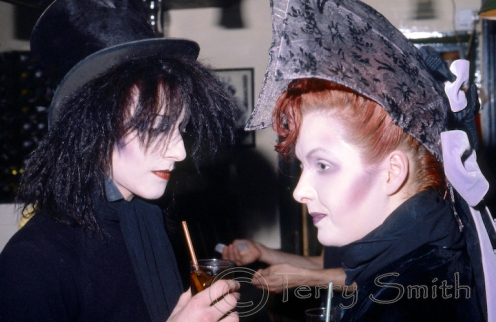 ❏ If you wish to attend the preview of Terry Smith/Blitz and Pieces on Thursday 7 June (6-8pm) in St Leonards-on-Sea, please contact the Lucy Bell Gallery directly to confirm (see link below).

Lucy Bell is curating the first exhibition of Terry Smith’s unseen Blitz Club pictures from its days as hothouse for the New Romantics movement. The exhibition also includes images of other musicians on the 80s scene such as Sigue Sigue Sputnik, Eurythmics, Boy George and Fine Young Cannibals, all shot with Terry’s sympathetic eye.

Terry, who lives near Folkestone, is now 72 and has worked on assignments for the New York Times, People Weekly, Business Week magazine and Financial World magazine. Notably, his assignments have included stories on the work of Médecins Sans Frontières in northern Iraq, and the plight of the Falkland Islanders just one month after the Argentine surrender. His work is held in the National Portrait Gallery Collection. 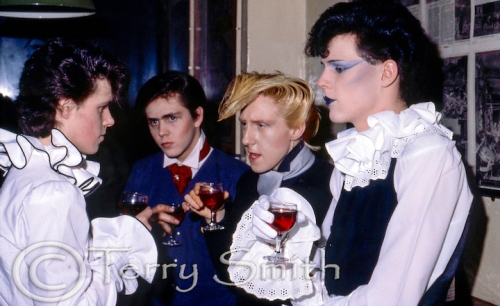 A frilly posse of New Romantics from Harlow at the Blitz 1980: from the left, Andy Bulled, Russell Williams, Jon Lockwood with golden “Seagull” quiff and Tommy Crowley 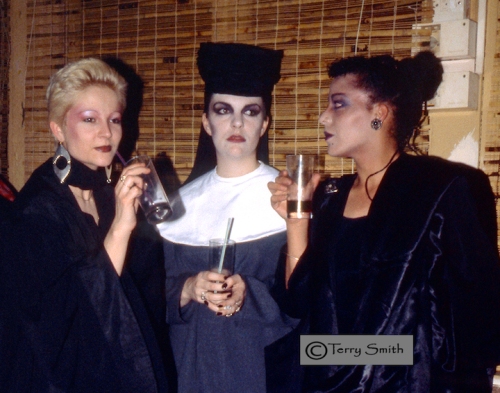 “The Blitz ruled people’s lives. Exactly that,” says Stephen Jones, today a renowned milliner who found willing models among the Blitz Kids for his witty hats when he graduated from St Martin’s School of Art. “A nightclub inspired absolute devotion of the kind previously reserved for a pop idol. I’d find people at the Blitz who were possible only in my imagination. But they were real.”

For one of the more inventive dressers at the club, tonight George O’Dowd looks remarkably like a normal boy next door 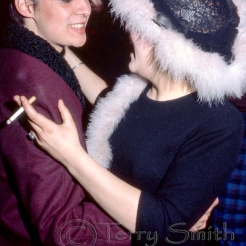 Robert Durrant dancing with Tracey Rivers in her marabou trim 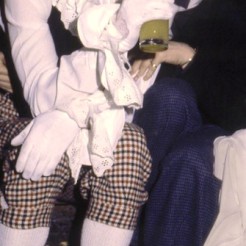 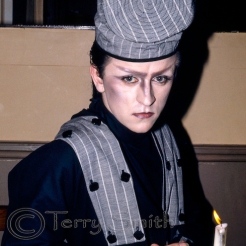 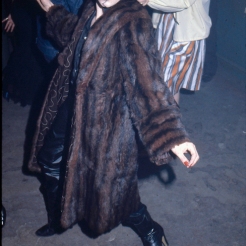 The soundtrack at this self-styled “elektro-diskow” was hard-edged European disco, synth-led, but bass-heavy: German sounds such as Kraftwerk and Gina X, Giorgio Moroder, dissonant no-wave on the Ze label, and always Bowie. Always Bowie. Plinky-plonky robot sounds inspired dances requiring anglepoise limbs and an unmoving chin. An overstated yet elegant jive saw partners hold both hands and raise knees as high as their waists. This spectacle shouted newness. [Extracted from Blitz Kids and the birth of the New Romantics at The Observer, by Yours Truly] 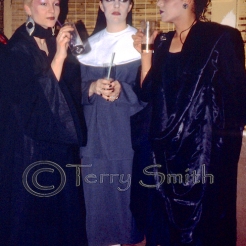 Mandy d’Wit, Judith Frankland and Darla-Jane Gilroy – who knew what the future held for this gifted fixer and two talented designers?

Dick Breslaw (as was): hint of a pout and one helluva cinched waist for this week’s look 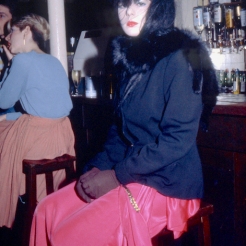 Helen Carey, face about Kensington Market on whom the word “glamping” had yet to dawn 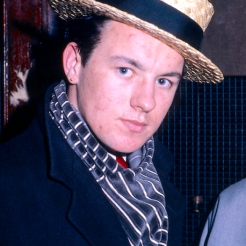 Earlier this year polymath Chris Sullivan had hosted his own decadent 1930s night at the St Moritz club: it was he who proposed the New Romantic mantra “One look lasts a day” 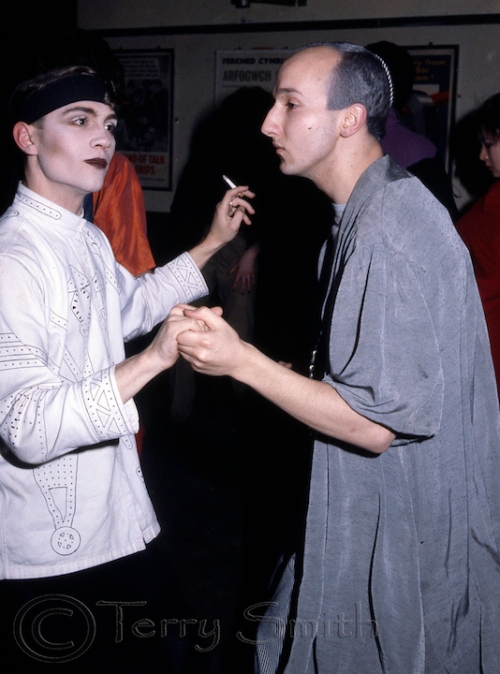 We are Fashion: David Holah of Middlesex Poly fostered body-conscious dressing… Stephen Jones of St Martin’s redefined the hat, among other things

➢ Update at Shapers of the 80s: Day Three of Terry Smith’s unseen pix of the Blitz

ON TUESDAY: WATCH FOR DAY FOUR OF
THE BLITZ IN COLOUR

➢ Read the story of Spandau Ballet, the Blitz Kids and the birth of the New Romantics at The Observer, by Yours Truly