❚ THIS WEEK IN 2011 Duran Duran’s album All You Need Is Now was released as a 14-song CD in Europe and North America. Shapers of the 80s gave extensive coverage to Duran’s glorious comeback tour of North America and their 30th anniversary party for the same week in 1981 when their debut single Planet Earth entered the UK Top 20 where it was to reach No 12. Relive these highlights on the album’s tenth anniversary… 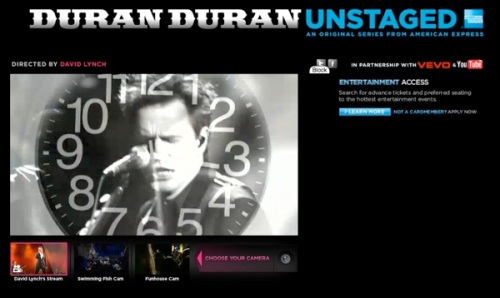 Duran live on YouTube, 2011: a choice of three camera streams and “Lynchian effects” smothering John Taylor’s performance on All You Need Is Now

➢ Previously at Shapersofthe80s: Crazee or crazed? David Lynch’s view of Duran from within his hellish cave…

❚ WHAT RUM NIGHTMARES DAVID LYNCH must have in bed at night, but then, he did direct Eraserhead after all. For the best part of two hours, today’s much vaunted Duran Duran live web concert in the Unstaged series kept making you want to hurl virtual cabbages at the screen, enraged by a director whose intent was to obscure the act from view with his relentlessly potty toy-box full of widgets. From 2am UK time till almost the dawn chorus, the band onstage in California had no idea what web audiences in 22 overseas territories (432,000 channel views by 6.30am) were enduring as they pushed on through 18 numbers… / Continued inside 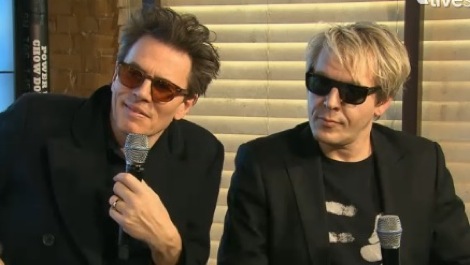 John Taylor and Nick Rhodes at SXSW in Texas, March 2011: Rhodes claimed to have 100,000 photos in his personal archive he’d like to get published somehow

➢ Previously at Shapers of the 80s:
Despite some sniffy critics, this is ultimately Duran’s best album since their glory years – Comprehensive round-up

Still hungry after all these years —
Adrian Thrills writes in the Daily Mail:
“ The band’s 13th album is much better than most of us could have anticipated. The nine new songs benefit from a diverse cast of special guests. Ana Matronic of the Scissor Sisters adds a seductive rap on Safe (In the Heat of the Moment). New York soul diva Kelis impresses on The Man Who Stole A Leopard. But if Mark Ronson’s input provides a creative spark, the most impressive thing is Duran Duran’s return to form as songwriters. The frontman, to his credit, also supplies some wonderful, multi-tracked vocal harmonies, superbly augmented by Rhodes’ clever electronic prompts and the urgent grooves of the rhythm section ” … / Much more inside

Spandau Ballet answering my question at their own reunion press conference

➢ Previously at Shapers of the 80s: In 2011 Spandau and Duran square up for battle just like the old days

❚ EVEN AS A UNIQUE CD COMPILATION of Spandau Ballet’s landmark hits was set for massive free distribution with The Mail on Sunday, Duran Duran announced a global concert live online at YouTube, along with their own album release on CD. It could be the 80s all over again when the two arch-rival bands vied for the title of leaders of Britain’s New Romantics movement. So which veteran band scored the bigger hit in 2011?… / Continued inside

Duran Duran earlier in 2011, a year of US and European tours, plus a streamed concert