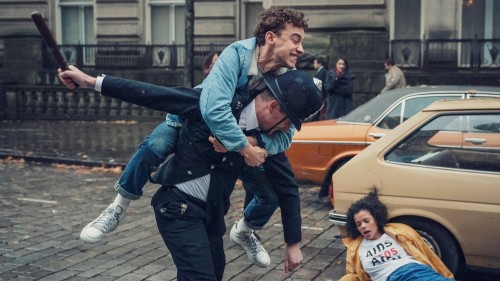 Gay activist as Aids casts its shadow: Olly Alexander as Ritchie in It’s A Sin

GAY TIMES has teamed up with Channel 4 for a series of video conversations between cast members from tonight’s new series It’s A Sin and artists and activists who lived through the decade, offering social and political context to the themes explored in this LGBTQ+ drama from Russell T Davies. . .

❏ “People forget how homophobic and racist it was in the 80s. People would actually say to you bluntly ‘You’re going to die of Aids – this is going to happen to you.” So says Andy Polaris – Eighties pop-singer with Animal Nightlife – to Omari Douglas, star of It’s A Sin. Omari plays a character called Roscoe who is forced to leave home when he’s 17 and his family finds out he is gay. The character quickly finds his tribe and a new group of friends who support each other during the decade that revealed the horrors of a new deadly virus.
➢ Click to watch Omari and Andy’s conversation at Gay Times

Hedonism in Heaven: Olly Alexander on the dancefloor in It’s A Sin

Russell T Davies has given us iconic television shows such as Queer As Folk, Years & Years, Banana, Cucumber, A Very English Scandal, and more. Set during the 80s, his new queer drama It’s A Sin has a soundtrack (guided inevitably by Murray Gold) that evokes the youth, vibrancy and gay sensibility of the era – big electronic anthems that have stood the test of time and changed the musical landscape.

Asked for an iconic tune that he loved, singer-actor Olly Alexander chose for his ambitious and complex character who leads the show Hungry Like The Wolf by Duran Duran. Omari chose Respectable by Mel and Kim, saying: “I just went through a phase of being completely obsessed with them.”

❚ It’s A Sin starts today 22 January at 9pm on Channel 4, with all episodes available immediately after on All 4.

➢ AnotherMag airs the vital role today of It’s A Sin with its creator Russell T Davies who declares: “Cast gay as gay – you not only get authenticity; you get revenge”

A HIT WITH REVIEWERS

It’s A Sin: Omari Douglas assumes the role of entertainer

➢ Aids drama is a poignant masterpiece – Lucy Mangan in The Guardian: “Humour and humanity are at the heart of this sublime series about London’s gay community in the 1980s, from the creator of Queer as Folk.”

➢ Living young, free and under the shadow of Aids in the 1980s – Hugo Rifkind in The Times: “Russell T Davies is a thousand miles away from, say, Hugo Blick or David Hare with their darkness and portentous heft. And yet I’m pretty sure he’s a far more important dramatist than either of them.”

➢ A dance in the face of death – Euan Ferguson in The Observer: “Russell T Davies depicts with wisdom how so many, shunned and ‘othered’ for most of their lives, might have chosen to adopt a defiant mood towards yet another orthodoxy, that of scientific reason.”

➢ Aids-crisis drama will break your heart and fill you with joy – Anita Singh in The Telegraph: “Russell T Davies’s best series so far.”