❚ HAPPY 80TH BIRTHDAY, SIR RICHARD STARKEY, aka Ringo from the Beatles… “Four drums that’s all Ringo needed”… “He’s a song drummer”… “He used his kit in a very different way”… “Ringo was the king of feel”… “Very innovative”… “It’s a Ringo swing: he washes the windshield on your high-hats”… “It’s that sloppy, swampy, falling down the stairs kind of sound that’s the coolest thing ever”.

Watch some of the world’s greatest drummers – including Dave Grohl and Taylor Hawkins of the Foo Fighters, Stewart Copeland of the Police, Questlove of the Roots, Tré Cool of Green Day, Max Weinberg of Bruce Springsteen and the E Street Band, and Chad Smith of the Red Hot Chili Peppers – all salute Ringo Starr from behind his famous Ludwig kit. 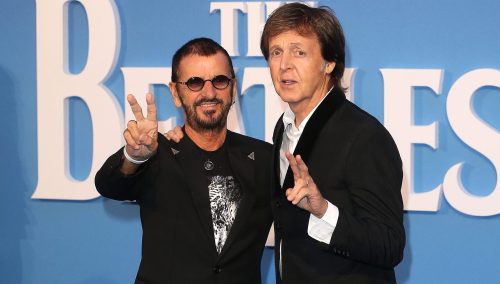 ➢ Previously at Shapers of the 80s:
1961, No wonder The Beatles changed the shape of music after 456 sessions practising in public