◼ TODAY’S SUN RUNS A GRIM ACCOUNT of how singer Ross William Wild was pushed into attempting suicide after being frozen out of Spandau Ballet last year. Only 11 months after he took over from frontman Tony Hadley, Ross took some pills and “crashed out” but thankfully a friend raised the alarm.

At that time in May 2019, Shapers of the 80s reported the whole curious background to Ross’s crisis of confidence. After his first impressive performances with Spandau he says he was “ignored” by management and claims he was banned from taking other music and theatre jobs, losing out on much needed income. The Sun reports today:

“ When he finally mustered the courage to quit, he was humiliated on national TV the next day when the band announced it would never perform again unless Tony rejoins — effectively sacking their young singer live on air. I couldn’t afford to be left on a shelf, not knowing where my next meal was coming from. Then the next day they forced Martin Kemp on This Morning and made him act like I was just being brushed aside. I never even got to say that I quit. I was so humiliated as they had treated me so badly for so long. It hit me like a ton of bricks. That’s when I tried to kill myself. ”

Shapers of the 80s revealed that Ross made the first move by tweeting that he had resigned, after which Martin Kemp went on ITV to flannel around the issue, barely mentioning Ross but yearning for the day Hadley would rejoin Spandau, saying this was “what people really want”. You can still hear this clip, below. Equally tactless had been Gary Kemp giving a killer “no future” interview to an American blogger only one month earlier. “There are no plans for Spandau going into 2020,” he’d said, and we reported that car-crash interview here too, in all its insulting detail.

LISTEN TO THE CRUCIAL PART OF MARTIN’S ITV INTERVIEW 2019:

+++
Within a couple of days Ross gave us his side of the saga, saying “the way things were put out on TV made me feel like crap”. His good friend sax player Steve Norman also got in touch to say: “I was neither involved in nor informed of any discussions or decision-making regarding the future of my band, least of all Ross’s position in it.” All of which still makes for a gob-smacking read.

Ross’s account in today’s Sun is well worth reading for its courageous candour. He says: “Spandau didn’t realise that they were dealing with a person. I’m not a titan of the music industry like these guys. They gave me a chance, little old Ross, and then they just brushed me aside.” There’s some consolation in knowing that last week Ross saw his new band Mercutio have its raunchy single Slap Bang! voted Classic Rock’s track of the week [see video at YouTube].

➢ Previously at Shapers of the 80s: Another Spandau bombshell – Kemp Brothers drive out Ross their ‘perfect’ new singer 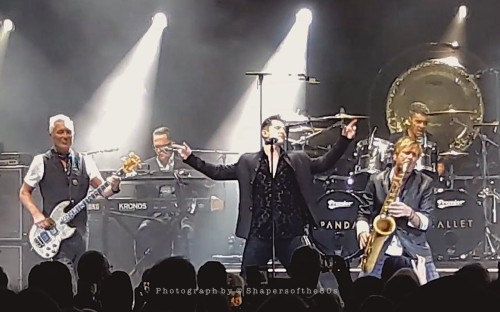 October 2018: What proved to be vocalist Ross William Wild’s last outing with Spandau Ballet at the Hammersmith Apollo