◼ Q MAGAZINE’S REVIEW SAID: “This unprecedented mindmeld of modern dance, avant-garde theatre, art installation, soul revue and carnival parade makes the conventional rock show seem as old-fashioned as music hall. Most artists don’t get to reinvent the pop concert once in a lifetime. Byrne has done it twice.” Here’s a brief taste of David Byrne’s sensational American Utopia world tour which during 2018 has played 13 dates in the UK (London, Brighton, Nottingham and Manchester this week) and moves on through Europe to Australia. These innovative concerts have won unprecedented rave reviews from critics on national newspapers and music press: “mind-blowingly meticulous and awe-inspiring”, “arguably the most acclaimed live shows of the year”, “the best live show of all time”. All true IMHO. Byrne’s 22 numbers were drawn from this year’s critically acclaimed album American Utopia, as well as classics from his solo career and the 1970s with the mould-breaking Talking Heads. All were choreographed to create a continuous visual and musical river of rhythm.

We’re happy to borrow the video above, shot by Cazza Gee close-up to the stage at London’s Eventim Apollo in Hammersmith (20.6.18) to convey the joyous free-form energy of the staging by Byrne and his 11-strong band. 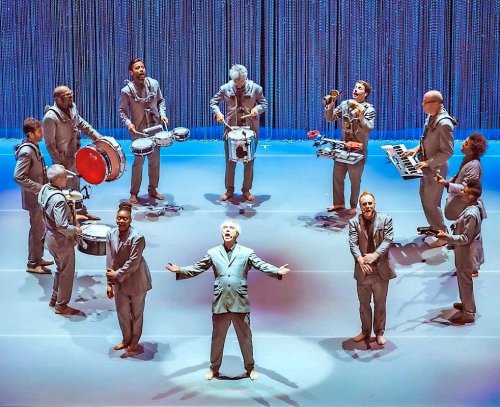 ➢ Former Blitz Kid and singer Andy Polaris reviews Byrne’s show in full at his own website, but here are his highlights. . .

“ The glowing five-star international reviews for David Byrne’s ‘American Utopia’ tour 2018 meant there was genuine and palpable anticipation surging through the 4,000-strong audience packed into the Brighton Centre this week.

The set opened with a vast empty stage, only a small table and chair with a grey-haired casually suited Byrne seated and singing to a plastic brain which he held aloft. He looked like the coolest science teacher explaining its merits, albeit barefoot and to a much more appreciative adult-education class. He was joined onstage by similarly attired backing vocalists Chris Giarmo and Tendayi Kuumba who we quickly realised, along with the rest of the 11-piece band, were agile in their dual role as musicians and dancers. It was the realisation that with Annie-B Parson’s sophisticated and at times elaborate choreography (especially for the backing vocalists) this was far from standard fare. I then remembered the work Byrne did with dancer Twyla Tharp in the 1980s, and realised this show has become a logical next step in the imaginative presentation of his eclectic catalogue. . .

The standouts were many but the surreal when released ‘Once In A Lifetime’ crackled with almost evangelical zeal as Byrne flung himself around on-stage… Against giant dancing shadows like a Busby Berkeley musical number, ‘Blind’ was given brassy punch and brought energetic solos from its talented percussionist pool… The opening guitar chords of ‘Burning Down the House’ did exactly what it said on the label… ‘Everybody’s Coming To My House’ exuded an inclusive party feel which Byrne explained was also matched by his band’s origins from all around the world. Personally I loved ‘Born Under Punches’ and ‘The Great Curve’ because ‘Remain in Light’ is one of my favourite albums. . . ”/ Continued at apolarisview 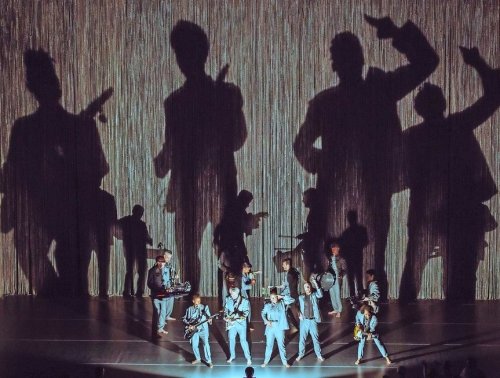