➤ Maxine and Marr: heard the deeply serious tale about the actress and the rock star? 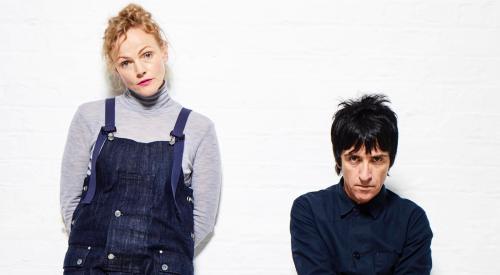 Maxine Peake and Johnny Marr: “You can’t avoid homelessness in Manchester. It touched us both”

Marr: “There are so many things about being working class that never leave you entirely. A certain gratitude. A kind of humility, whether it’s forced on you or not. You could even call it guilt, I guess: working-class guilt.”

“There is a guilt, yeah,” says Peake. “A friend said to me, ‘Are you sure you’re not a Catholic? ’Cos you’re riddled with guilt.’ It’s tied up with a work ethic. You’ve got to be seen to be grafting for what you’re doing. You know what I mean? Constantly.”

“ When the musician Johnny Marr met and the actor Maxine Peake in 2014, they “clicked straight away”, bonding over a mission to bring back socially conscious art. The first fruits of their partnership are now about to be released: a five-minute piece entitled The Priest, which has been turned into a short film, co-directed by Marr, set in the centre of Manchester, as a vivid first-person account of homelessness. Here they talk about shamanic rock stars, working-class guilt and how their spoken-word album about homelessness strives to be a modern Cathy Come Home. . .

Marr says of Peake at one point: “I’ve actually met someone who probably works even more than me, if that’s possible,” and Peake’s résumé suggests he’s not wrong. Next year will see the release of Funny Cow, in which she stars as a female standup trying to push her way through the grimness of 70s Britain, as well as the staging at the Royal Exchange of Queens of the Coal Age, the play Peake has written about the true story of four women resisting the closure of a Yorkshire coalmine. . . ”

PLUS MARR ON THE M-WORD

“ Marr says he was “crushed and heartbroken” by the vote for Brexit, whereas his former creative partner Morrissey seemed to rejoice in it. Though Marr has remained firmly on the political left, Morrissey now seems to champion the reactionary right. “I’ve stayed the same. I’ve never changed. But … people tend to forget that it was 30 years ago that we were in a band together. Stop and think about it: 30 years. It’s a long time. So I honestly don’t care very much. . . ” / Continued at The Guardian online